“He came on the line to say there was now an alarming situation in Libya, and on behalf of his government he was asking the United Kingdom and the West to help them to suppress the rebellion,” Hague recalled last week in front of a parliamentary inquiry examining the Britain’s relations with Libya and its part in the NATO-led intervention that contributed to Gaddafi’s downfall.

“He had clearly formed a view that this was a friendly country, and that a friendly country with which you have a personal relationship will intervene on your behalf when you are in trouble … I think he was under a misapprehension about that, but he was not under it for many minutes,” Hague continued.

Yet the exchange tells its own story of the close links that had briefly flourished between the British and Libyan governments, even despite decades of hostility marked by the alleged Libyan bombing of an American airliner over Lockerbie, Scotland, in 1988, the killing of a female police officer by a gunman shooting from the Libyan embassy in London in 1984, and British support for US air strikes against Libya in 1986.

The ‘Deal in the Desert’

Today, the inquiry will hear from Tony Blair, the former prime minister whose handshake with his host in a tent on the outskirts of Tripoli in 2004 – dubbed the “Deal in the Desert” – set the tone for Gaddafi’s transformation from an international pariah into a favoured ally.

The consequences of that deal, which followed months of Blair-brokered negotiations culminating in Gaddafi agreeing to abandon his nuclear and chemical weapons programmes, are alleged to have included both countries’ complicity in US rendition operations.

According to documents retrieved from the ransacked offices of the Libyan intelligence agency in 2011, British security services also cracked down on Libyan dissidents in the UK, with some placed under control orders amounting to house arrest.

British oil firms benefited from the deal in the form of lucrative contracts, while the Gaddafi family moved billions of dollars in assets to London and gained access to influential circles, with Saif acquiring a PhD from the London School of Economics and subsequently facing plagiarism accusations over his outsourcing of the research to a consultancy firm.

At its heart were relationships between Blair and Gaddafi, and other senior officials, that correspondence suggests were not just pragmatic but invested with personal warmth.

Days before Blair’s first visit to Libya, Abdel Hakim Belhaj, an exiled leader of the opposition Libyan Islamic Fighting Group (LIFG), and his pregnant wife were returned to Tripoli aboard a CIA rendition flight after being detained in Malaysia while travelling to the UK to claim asylum.

In a fax to Moussa Koussa, the  Libyan intelligence chief,  Mark Allen, the head of MI6’s counterterrorism unit, wrote: “This was the least we could do for you and for Libya to demonstrate the remarkable relationship we have built in recent years.”

Allen added that he had been “amused” by an American request for questions for Belhaj to be channelled through them: “I have no intention of doing any such thing. The intelligence about [Belhaj] was British.”

Remarking on preparations for Blair’s arrival, Allen said that officials were keen for him to meet “the leader” in his tent: “I don’t know why the English are fascinated by tents. The plain fact is that the journalists would love it.”

OPINION: The dark side of the ‘deal in the desert’

Belhaj was subsequently imprisoned for six years, during which time he says he was tortured. In 2013, he told Al Jazeera’s People and Power that he was also questioned by British intelligence officers.

“I told them we were being tortured and beaten and hung up by our arms,” said Belhaj. “The woman in charge nodded her head to say she understood, as did the man next to her.”

Sami al-Saadi, another LIFG leader abducted with his wife and children from Hong Kong, also told Al Jazeera how Koussa had boasted of his connections with Western intelligence services.

“He told me, ‘It’s a small world now. Before you were abroad and we couldn’t reach you but now we can make a call to MI6 or the CIA,'” said al-Saadi.

In 2012, the UK government agreed to pay al-Saadi $3.5m in an out-of-court settlement without acknowledging liability for his abduction. Belhaj’s ongoing legal campaign to secure a government apology is currently being considered by the British Supreme Court.

A public inquiry into allegations of British complicity in rendition was cut short in 2012 after police launched a criminal investigation into Belhaj’s and al-Saadi’s cases. Prosecutors have yet to bring any charges.

Cori Crider, the strategic director of the human rights organisation Reprieve, told Al Jazeera that Blair should come clean about what he knew about the rendition operations and apologise for his government’s actions.

“The rendition of the Belhaj and al-Saadi families to Gaddafi’s torture chambers would not have happened without MI6 under Tony Blair,” Crider said. “But everyone in the Blair government has so far managed to dodge responsibility for the horrific ordeal these families had to endure.”

Blair returned to Libya to meet Gaddafi again in 2007 only weeks before leaving office, as well as on several further occasions as a lobbyist for US bank JP Morgan, and the pair remained in touch even as the revolution gathered momentum.

“If you have a safe place to go, then you should go there,” Blair told Gaddafi in a telephone call, according to emails released by Hillary Clinton, the former US secretary of state. He is also alleged to have informed David Cameron, the British prime minister, that Gaddafi wanted to “cut a deal”.

In an interview in 2011, Blair said that he had no regrets about his dealings with Gaddafi, and said Gaddafi’s mistake had been his failure to carry out internal reforms.

Yet for many, the UK’s willingness to do business with a government accused of human rights abuses and state-sponsored terrorism was unpalatable long before Gaddafi’s use of deadly force against protesters saw him cast once more as a pariah.

Libya agreed in 2002 to pay compensation to the families of the 270 people killed in the Lockerbie bombing in return for the lifting of international sanctions, as well as handing over Abdel Basset Ali al-Megrahi, the former Libyan agent who remains the only person ever convicted in the case.

But doubts over al-Megrahi’s conviction, his release from a Scottish prison on compassionate grounds in 2009 before his death from cancer in 2012, and the failure to bring others to justice have left many families still searching for answers. In 2013, an Al Jazeera investigation uncovered evidence suggesting that Iran may have orchestrated the bombing.

The UK government faces further scrutiny over its failure to secure compensation for victims of the Irish Republican Army’s bombing campaign between the 1970s and the 1990s that relied on Libyan-supplied Semtex.

Blair has been asked to appear in front of another parliamentary committee investigating why British citizens were excluded from a $1.5bn deal he helped to negotiate in 2008 for American victims of Libyan-sponsored terrorism.

Libyan exiles caught up in the British crackdown that followed the “Deal in the Desert”, many of whom returned home to join the fight against Gaddafi, say their experiences changed their perceptions of a country they believed had offered them sanctuary.

“Many former LIFG members were called upon to lead the rebellion, and rendition victim Abdel Hakim Belhaj led the rebels to victory in Tripoli. The irony was that one-time terror suspects were now receiving direct air support from the UK government,” Moazzam Begg, the outreach director for human rights group CAGE, told Al Jazeera.

“One man I know who’d been on a control order went on to become a head of security in Tripoli and was responsible, bizarrely, for the safety of David Cameron and [French President] Nicolas Sarkozy when they visited Libya in 2012.”

Ziad Hashem, an LIFG member granted asylum by Britain, told Al Jazeera that he was imprisoned for 18 months without charge and restricted to his home for a further three years based on information he believes was supplied by Libyan intelligence.

“When the revolution started, things changed in Britain. Their way of speaking to me and treating me was different. They offered to give me benefits, even indefinite leave to remain or citizenship,” said Hashem. “But I told them, ‘I do not want to be in Britain. I’d rather be anywhere else.'”

In 2011, Eliza Manningham-Buller, who headed MI5 between 2002 and 2007, said the aim of engaging with Gaddafi to persuade him to abandon his weapons programmes had not been “wrong in principle”.

But she added: “There are clearly questions to be answered about the various relationships that developed afterwards and whether the UK supped with a sufficiently long spoon.” 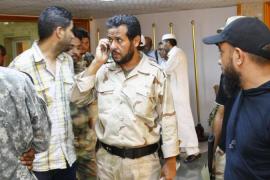 Court rules Abdel Hakim Belhaj can sue British government over claims he was illegally sent back to Libya and tortured.