Vijayawada-Guntur, Andhra Pradesh  – At a busy market in Vijayawada, a city in India’s southern and soon-to-be-divided state of Andhra Pradesh, farmers happily call out to buyers, promising low prices for their vegetables and fruits. Their mood, however, darkens immediately as one diverts the conversation to national elections and would-be bifurcation.

Farmers here are concerned that the carving out of India’s 29th state, Telangana, will impact the irrigation potential in the region as the two main rivers – Krishna and Godavari – first flow through the new state. While crop failures have led to farmer suicides in Telangana, these farmers fear that blocking the drainage area of the two rivers could leave them high and dry.

“Once the state is divided, we need to get water from upstream. Will the [Telangana] politicians allow it to come into [our] Krishna district?” Atluri Saradhi, 60, from Kunchanapalli village told Al Jazeera. “Canals will be dry and bore wells will also become dry.”

“Whether BJP [Bharatiya Janata Party] comes or Congress comes [to power], if the water is not there and there is nothing in our canals, then there is no use,” he said.

For the people of Krishna district and other parts of the residual Andhra Pradesh, which goes to the polls on May 7, the term “starting over” applies literally.

On June 2, Andhra Pradesh state will officially be divided into two despite months of widespread protests against the decision. The ruling Congress party finally gave in to demands of a separate Telangana state after the Telangana Rashtriya Samithi party went on a hunger strike.

Politicians from the Telangana region have been fighting for decades for a separate state, alleging they had been overlooked by the southern and richer region of the state.

While on April 30, Telangana and its people voted for the first time as a new state, on the other side of the border, the residual Andhra Pradesh or Seemandhra is bracing for a rockier start.

There is some anger here as the IT hub of Hyderabad – where most industries and educational institutions are located – will no longer be part of the state.

Seemandhra, consisting of Rayalaseema and the slightly better-off Coastal Andhra, will have 10 years to build a new capital before Hyderabad, the bone of contention, is handed over to its new neighbour. The city generates an annual revenue ranging from Rs 20,000 crores to Rs 34,000 crores (around $3bn to 5bn).

“Over these 57 years of the formation of united Andhra Pradesh, there has been lop-sided development,” MC Das, a former Andhra Loyola College commerce professor, said referring to the investments made by Coastal Andhra industrialists in Hyderabad. “There are backward districts in Coastal, Rayalaseema and Telangana.”

“I think they have realised, ‘Oh good god all these years we have put all our eggs in one basket, now we are being asked to get out,'” he said.

Despite the federal government promising a Rs 50,000 crores ($8.3bn) special package for rebuilding, regional parties such as the Telugu Desam Party (TDP) and its rival the Yuvajana Sramika Rythu Congress Party (YSRCP) – a breakaway of the Congress party – are still fuming.

“People have been cheated,” Devineni Uma Maheshwara Rao, a local TDP legislatior for Gollapudi town, west of Vijayawada, said. “We have been deceived by the Congress government and [party president] Sonia Gandhi just because of votes.”

Thadi Shakuntala, the ex-mayor of Vijayawada and a YSRCP leader, called the decision by the centre to bifurcate the state as “careless” but also a wake-up call.

“We all neglected this state,” she said. “There is fervour among the people that we should develop our Andhra Pradesh now. That will happen. But a lot of work is needed.”

In the fight for the region’s 25 seats, the former chief minister and TDP chief Chandrababu Naidu, 64, who is credited with boosting Hyderabad’s IT sector while ignoring the rest of the state, will go up against YSRCP chief YS Jagan Mohan Reddy, 41, the son of a former chief minister.

Many experts have cautioned against committing past mistakes of centralised policies that led to skewed development, an issue most parties have promised to address.

The TDP-BJP alliance, boosted by support from Jana Sena Party of popular Telugu actor Pawan Kalyan, has been selling the  dream of growing Seemandhra , while Congress has promised to make all 13 districts of the residual state more successful than Hyderabad.

Interestingly, the BJP which supported the formation of the new state, has inked a political alliance with the regional Telugu Desam Party, which had vehemently opposed the bifurcation.

Vijayawada (which means land of victory in local Telugu language), the financial centre and transportation hub of the region, has figured in the BJP prime ministerial candidate Narendra Modi’s ” 100 smart cities of India ”  project. It’s a typical Indian city with cramped housing and narrow roads, save for the brand-new expressway that connects it to Hyderabad.

However plans for expanding the city’s road network and reducing the concentration of the population are already in motion, according to  local urban developers .

For YV Ramana Rao, the president of a builder’s association in Vijayawada, this is good news.

“All the political parties are saying they will develop Seemandhra area like Singapore, so we are also under the impression that within five to 10 years this place will develop just like Hyderabad,” Rao said.

Building associations in the city say there is an upsurge of construction projects. LVS Rajashekhar, a real estate entrepreneur who is responsible for bringing the first shopping centres and even a low-cost carrier airline to Vijayawada, says that the city could see the return of the business community living abroad.

“In the past 10 years, everything has stagnated, no development, no investor was looking at us,” he said. “They know the potential is there in Vijayawada.”

Students and youth are also worried about their future as the top educational institutions and most of the job opportunities are in Hyderabad. The fact that seats will be reserved for students from Telangana has further dampened their spirits.

Tina, a college student at Acharya Nagarjuna University (ANU) on the outskirts of Vijayawada, sees little future prospects in the region.

“These universities here [in Seemandhra] don’t have those kind of standards because everyone concentrated on the capital,” Tina, whose hopes to pursue a PhD in Hyderabad have been quashed, said. “Yes we are stuck, what to do? OK, it is beneficial and everything, but for the next generation.”

ANU has applied to become a central university to deal with the inevitable rise in enrollment. P Rajasekhar, the registrar of the university, told Al Jazeera that polticians have announced more technical and management institutions in the state.

ARK Bhanu, 55, a retired bank employee, says that she will vote for a strong political party who can take them forward in this regard.

“We are looking forward to a lot of changes,” she said. “Lot of educational institutions are needed around here, lot of irrigation projects have to be developed here.”

Das the retired professor said that most people in Seemandhra, including himself, feels that the time has come to move on and the elections will be a test for the direction of the state.

“Challenges come out of crisis,” he said. “A country like Japan could build almost from the ashes. Andhra Pradesh can as well with its agricultural resources and its mineral resources.”

Das added: “I don’t give a rosy picture, but I also don’t give a gruesome picture. All is not lost. We have lost Hyderabad, so what?” 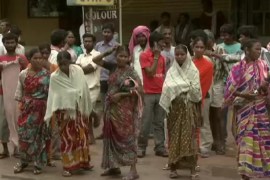 Residents of Telangana say they will finally get a fair deal and see an end to discrimination. 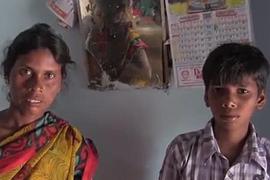 Telangana farmers left to fend for themselves 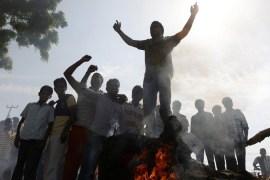 The controversy over India’s 29th state

Supporters of Telangana say they need a homeland of their own, but opponents fear losing the capital, Hyderabad.