Kabul, Afghanistan – The explosion was powerful enough to boom its way over the small, barren mountains covered in makeshift houses that lie in the centre of Kabul and echo over the heads of the throng crowding in to see Dr. Ashraf Ghani Ahmadzai speak on the last day of the Afghan presidential campaign season. No one in the crowd blinked or even turned their head.

Ahmed Shah Wardak, without pausing, continued to explain why he thinks Afghanistan’s youth are so important to this vote. “People my age have grown up during war. Our minds are old, and things have changed in the past decade,” says the 53-year-old former Afghan Communist army officer. “We need a new mentality. Our country and our people, they need a big, positive change right now. Only young people can do this.”

And with nearly two-thirds of Afghans under the age of 25, this demographic will be critical for candidates to win. But, while young people do seem to be more engaged and more enthusiastic for this vote compared to the one in 2009, major factors like fears over security, ethnic tensions, the war, vote rigging, and the candidates’ histories have all worked to pull attention away from this group, making their role in the upcoming ballot hard to gauge and their effect hard to measure.

“Afghanistan’s youth make up a vital portion of voters. So despite all this insecurity and threats, all these attacks over the past few weeks, we have seen all these young people queuing to get their voter ID cards,” says Abdul Waheed Wafa, executive director of the Afghanistan Center at Kabul University. “A lot of the candidates are counting on them to turn out and vote on April 5.”

Many people my age are interested in voting because we want to support our country and we want to make our choice.

by - Rahmatullah, 20, a Pashtun university student from Kandahar

To do this, Dr. Zalmai Rassoul, Dr. Abdullah Abdullah, and Dr. Ghani – all frontrunners – have made pledges to bring Afghan youth into government, though how this will be done remains unclear. For the most part, however, the candidates – and the press – have focused on other issues .

Some attention has focused on the conflict with the Taliban, as in the past months a spate of bombings has rocked Kabul, targeting the election commission, a guesthouse and a hotel used by a foreign aid organisations and a restaurant frequented by foreigners. Attention has also focused on the bilateral security agreement between the US and Afghanistan, a document that would set the status of foreign forces past the December 2014 withdrawal date. All of the candidates have said that they will sign the accord.

The candidates have also talked about ending corruption – or at least mitigating corruption – finding more work for the unemployed, and expanding education, all extremely important aspects of Afghanistan’s political landscape. Yet, Afghanistan is the lead opium producer in the world, is dependent on foreign aid, has 35 percent unemployment (according to a 2008 estimate), an insurgency raging in the countryside, rampant corruption , and a divided, illiterate, rural populace – all ensuring that this presidential campaign is taking place in conditions very different from elections in other parts of the world.

Yet through all this, young Afghans seem to be engaged and somewhat optimistic – even when the candidates are all older men who have been either government insiders or somehow involved in the past 30 years of violence.

“Many people my age are interested in voting because we want to support our country and we want to make our choice,” says Rahmatullah, 20, a Pashtun university student from Kandahar who had just come out of a rally supporting Rassoul in Kabul. And he may get to make that choice twice, after gleefully shouting that he has two voter registration cards – casting a spotlight on broad fears among the international community that the $126m foreign-funded election will be flawed by massive fraud.

His friend, Rafiq Agha, a heavyset 21-year-old studying in Turkey who had come back for the election, was more specific, saying, “Rassoul is a doctor, he is intelligent and he worked for many years in the government and he has a PhD. Also, he wants 50 percent of the government to be run by young people. I just hope that he creates a ministry for youth issues in Afghanistan.”

Shaista Shaikhan, 19, a singer dressed in fluttering red and green robes, supports Ghani for the same reason. “Dr. Ghani is thinking of giving 60-70 percent of the young generation positions in the government. He wants to give power to the younger generation. My vote will make a difference.”

Indeed, unlike older Afghan voters, who seem to be focused on security and stability, younger voters seem most interested in the economy and education. “The economy is important for young people. It’s the most important. Our leaders need to know that young people can work with their own hands, that we can improve our own level, that we can improve the future,” says Ghowsuddin, 18, a student from Samangan who is studying in Kabul.

Other issues interested Sadav Tanha, a 19-year-old filmmaker who is supporting Rassoul. “During his speech he was talking about improving Afghanistan by ending corruption and by ending violence again women. I will vote for Zalmai Rassoul and my parents will also vote for him, too,” she says, brushing a wisp of black hair back under her hijab. But she said they had not influenced her. “This is my decision, not my parents’. This is an election for my future, so I have to make the decision myself.” 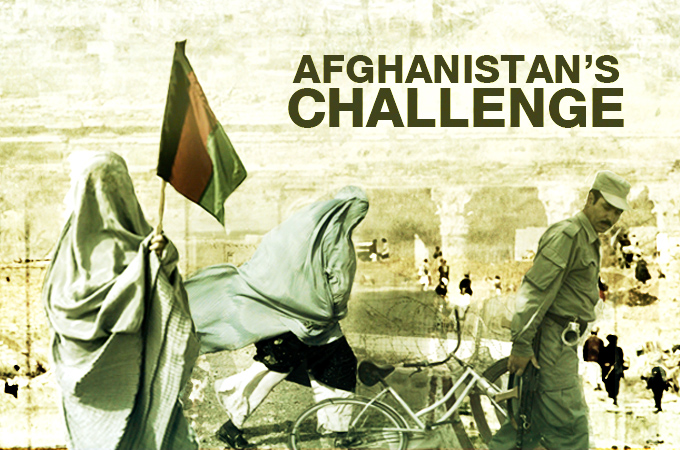 Although everyone was able to say why they were supporting a candidate, few were clear on why they opposed the others, emphasising the fact that while Western diplomats see differences in the personalities and histories of the candidates, they see little difference between their platforms. Only one young person was clear on why he would vote for one and not the others, saying, “One thing that is important to understand is that these men are very good, but from among them, many were jihadi leaders in Afghanistan,” says Nazir Rassouli, 20. “This means they have had a hand in the fighting in Afghanistan, and I will not vote for them.”

What emerges, after talking to Afghan youth, is a fractured and unclear picture – a fact that will make their role in the upcoming election hard to predict. “Youth constitute the largest voting bloc. Unfortunately, they have not been able to articulate their grievances and the candidates are not from the same generation – so you people do not see them represented. Besides, the platforms that have been introduced are not youth-oriented. From a youth perspective, the elections do not appear to be very promising,” says Daoud Moradian, the head of the Afghan Institute for Strategic Studies and a former Foreign Ministry advisor.

In the end, any conclusions are hard to make, since Afghanistan’s under-25 population is so vast and diverse. “Young Afghans are a large group and are varied in their outlook, depending on where they come from and where they live. There is a tendency to see them as a group that is somehow intrinsically moderate and modern and more educated than their parents, but that might be a bit too optimistic. They cover a wide spectrum,” says Martine van Bijlert, a founder of the Afghanistan Analysts Network.

“With so many youths, you’re getting a lot of voters who don’t necessarily have the same political baggage as their parents or the same history, and this makes it more difficult to predict how they will vote and where the election will go,” van Bijlert says. “They may vote very differently from their parents, or they may not. And because the youth population is fragmented, it makes it harder to predict how the vote will go.”