Sir Richard Branson is now an astronaut. The 70-year-old billionaire rocketed towards the stars in a fully crewed Virgin Galactic spacecraft on Sunday morning – at least nine days before rival space tycoon Jeff Bezos hopes to try and reach the edge of space in a Blue Origin ship.

Branson’s successful flight is more than just a victory in a space race between billionaires; it fires the starting gun on a new era that could open space travel beyond government programmes to non-professional astronauts – and in doing so, provide yet another boost to a rapidly evolving space economy.

Following Sunday’s success, Virgin Galactic expects to launch commercial flights to suborbital space next year. To date, the firm has sold an estimated 600 tickets, fetching a price of roughly $250,000 each. Some of the paid-up passengers include celebrities like Tom Hanks and Lady Gaga as well as fellow space-boosting billionaire Elon Musk.

“I have wanted to do this since I was a child,” Branson said following his return to terra firma on Sunday. “But honestly, nothing could prepare you for the view of Earth from space.”

Always the salesman, Branson has claimed a major victory for Virgin Galactic, which he founded. But the world’s richest man – Jeff Bezos – is also vying for a piece of the commercial space market with his company, Blue Origin.

Blue Origin was part of a team that lost out to SpaceX for a multibillion-dollar contract to build NASA’s next human landing system to ferry astronauts to the lunar surface.  An official protest to contest the award was filed by Bezos’s firm. A ruling on that is expected sometime in August.

In the meantime, Blue Origin is building a massive new rocket, called New Glenn, which will compete with SpaceX’s Falcon 9 and Falcon Heavy. That rocket is estimated to start flying sometime next year. 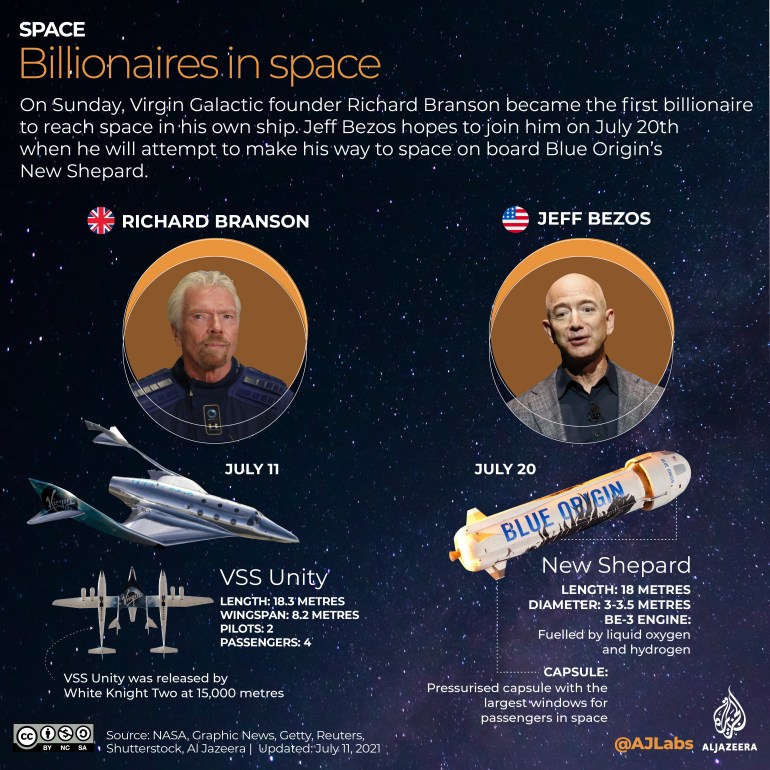 The race to space

Historically, space has been a domain that solely belonged to the military or to governments and their respective space agencies, like NASA and Russia’s Roscosmos. But in recent years, there’s been a paradigm shift, with more and more private companies making a name for themselves by putting hardware in space.

Instead of building all the hardware itself, NASA has turned to the private sector to help reduce costs and spur innovation. The United States space agency is reaping the fruits of that labour now with its commercial crew and cargo programmes.

SpaceX has successfully launched three different astronaut missions into space, bringing down the cost of space travel by millions. Right now, a seat on the Crew Dragon capsule costs NASA an estimated $55m versus the $90m NASA was paying per seat to Roscosmos for a ride on the Soyuz.

Though Musk, Bezos and Branson are currently capturing headlines, it was another billionaire named Peter Diamandis who took the first significant steps towards opening up space to commercial players in the late 1990s, by creating a competition he hoped would spark a thriving private space industry: the X Prize.

That initial competition challenged teams across the globe to build a spacecraft capable of carrying humans into space multiple times. The first team to successfully launch (and do it twice in a short period of time) would win a $10m prize.

It would take nearly a decade before the prize would be claimed. A team led by Burt Rutan built a small, rocket-powered vehicle called SpaceShipOne, which was designed to launch from an aircraft, like NASA’s old X-15s.

The craft’s success was an inspiration to many, as Diamandis hoped, and caught the eye of one particular space enthusiast — Sir Richard Branson. He acquired Rutan’s company, Scaled Composites, and founded his own space company, Virgin Galactic in 2004. He then set to work on building the next-generation spaceship, SpaceShipTwo.

The upgraded ship would carry a total of six passengers up into space and launch a thriving space tourism industry. Or at least that’s what he hoped would happen. Building something that will fly in space proved to be quite the challenge. Virgin Galactic suffered losses during a catastrophic failure of its SpaceShipTwo in 2014, which resulted in the death of one of its pilots.

But Branson and his team of engineers persevered. That determination paid off when the company finally reached space in 2018. Additional test flights, including one with the company’s Chief Astronaut Instructor, Beth Moses, laid the groundwork for Branson’s historic flight on Sunday.

“Today was the result of years of work and the enormous sacrifice by many,” George Whitesides, chairman of the Virgin Galactic Space Advisory Board, told Al Jazeera. “Increased spaceflight will change humanity’s future for the better, and this flight helps make that happen.”

Branson and three other crew members strapped into SpaceShipTwo on Sunday morning following a 90-minute delay due to poor weather in the desert in New Mexico in the US. The quartet of astronauts along with their two pilots successfully completed an edge-of-the-seat suborbital test flight designed to prove that Branson’s space plane is ready for those passengers who can afford the ultimate thrill ride.

Branson’s trip began in dramatic fashion as Virgin’s Galactic’s massive carrier plane — with the VSS Unity rocket-powered spaceplane bolted under its wing — lifted away from the company’s Spaceport America launch site near Truth or Consequences, New Mexico at 8:40am local time (14:40 GMT) following a 90-minute delay due to poor weather.

The company pulled out all the stops for the livestream, which was hosted by Stephen Colbert, and included a live performance from R&B musician Khalid following the crew’s return to Earth. It was flashy, it was hyped, it was everything you expected from a burgeoning commercial tourism company.

The theatrics were backed up by the success of the actual mission, with the ship, dubbed Unity, zooming to an altitude just above 80km (50 miles) — NASA’s definition of space — giving Branson and his five crewmates approximately three minutes of weightlessness coupled with breathtaking views of Earth before they plunged back into the atmosphere for a spiralling descent to touch back down at Virgin’s New Mexico launch site.

The successful flight essentially upstaged Bezos, who plans a suborbital spaceflight of his own next week.

Bezos announced he would fly along with his brother and a yet-to-be-named mystery bidder who won a seat on the flight during a private auction last month benefitting Club for the Future, Blue Origin’s charity that supports science, technology, engineering and mathematics.

The winning bid brought in $28m.

The trio will be joined by 82-year-old Wally Funk, an accomplished aviator who has been waiting six decades to go to space. She was originally part of NASA’s women in space programme dubbed the Mercury 13 — a group of female astronaut candidates who in 1961 were put through the same tests that NASA’s original group of astronauts, the Mercury 7, were subjected to.

Funk, who is poised to become the oldest person to ever fly in space next week — a record previously held by John Glenn when he flew on the space shuttle Discovery at the age of 77 — never gave up on her dream to become an astronaut.

“I never let anything stop me,” Funk told Al Jazeera. “I know that my body and my mind can take anything that any space outfit wants to give me: high-altitude chamber test, which is fine; centrifuge test, which I know I can do five and six Gs. These things are easy for me.”

Funk holds the record, set in 1961, for the longest time in an isolation tank — clocking in at more than 10 hours and smashing the record held by John Glenn. That experience will come in handy as the Blue Origin flight participants have to pass certain medical qualifications as part of the flight requirements.

Funk, along with another big name in the space industry — Elon Musk — has purchased tickets on Virgin Galactic. It’s unclear when either will fly or if Funk will still keep her reservation as she purchased it prior to being selected by Blue Origin.

In response to Musk’s purchase over the weekend, Branson said he might reciprocate one day and buy a ticket on a SpaceX voyage. And Musk was there to cheer Branson on from the sidelines on Sunday.

In a sign of heating competition for the commercial space flight market, Blue Origin took to Twitter on July 9 to highlight the differences between it and Virgin Galactic – pointing out differences in altitude as well as the number of test flights. Blue Origin also boasted that it has the “biggest windows” in space. (That is until you look at the cupola on the International Space Station.)

Former NASA astronaut Tom Jones helped shed some light on which design is actually better. According to the former four-time space flier, both designs have their advantages. “Perhaps the simpler capsule design is cheaper to develop and fly than a spaceplane, but the spaceplane may be able to fly more frequently, since it doesn’t require parachutes, but relies on a runway,” he told Al Jazeera.

Despite his company’s Twitter boasts, Bezos took to Instagram to compliment Branson and his team after they landed, posting a note saying “congratulations on the flight. Can’t wait to join the club!”

He got a step closer on Monday after the FAA delivered final approval for Blue Origin to carry humans into space on its New Shephard launch system.

If all goes according to plan, Bezos will become the second private space mogul to join the “billionaires in space” club on July 20 – the 52nd anniversary of the Apollo 11 moon landing.