After a volatile weekend, Bitcoin has once again surpassed $40,000, reaching its highest level in more than two weeks.

The world’s largest crypto gained as much as 4.5% Monday to $41,020, extending its rally to a second day. The coin has rallied roughly 9% since Friday. The wider Bloomberg Galaxy Crypto Index, which tracks some of the major cryptocurrencies, also advanced, adding as much as 7.7% at one point.

With Bitcoin crossing the $40,000 threshold, many chartists are looking at $42,500 as its next important level to breach. That number roughly represents its 200-day moving average and topping it could mean the coin rallies toward $50,000.

“Bitcoin is always going to be volatile and the manic run-up we had was never sustainable. The question is where do we settle? What is the new floor in Bitcoin?,” said Tom Essaye, a former Merrill Lynch trader who founded “The Sevens Report” newsletter. “In order for Bitcoin to resume that rally, I think you’re going to need to see more widespread legitimate adoption.” 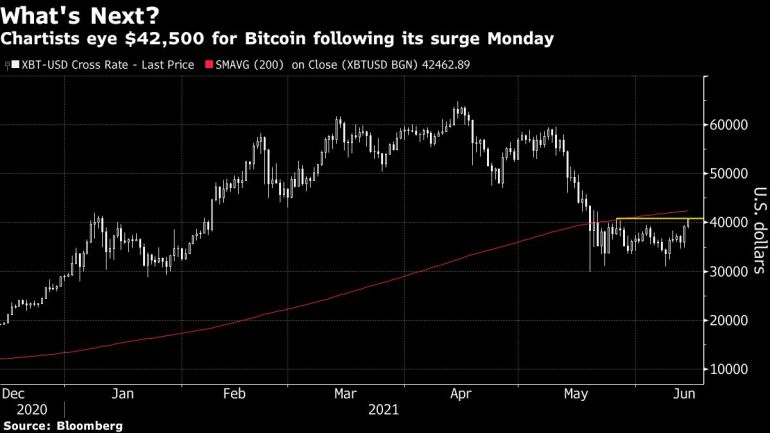 Cryptocurrencies have been under pressure in recent weeks, with Bitcoin losing about 30% since mid-April, when it hit a record of almost $65,000. The recent selloff has been exacerbated by a public rebuke from Tesla Inc.’s Elon Musk, who criticized the amount of energy used by the servers underpinning the token and reneged a previous offer to allow customers to buy his cars using the cryptocurrency. Increased Chinese regulatory oversight has also soured the mood.

But prices got a boost at the start of the week after veteran hedge fund manager Paul Tudor Jones – who said last year Bitcoin could be a good hedge against inflation – re-endorsed the coin in a television interview.

“I like Bitcoin as a portfolio diversifier,” Tudor Jones of Tudor Investment Corp. said in an interview with CNBC. “Everybody asks me what should I do with my Bitcoin? The only thing I know for certain, I want 5% in gold, 5% in Bitcoin, 5% in cash, 5% in commodities.”

Meanwhile, over the weekend, Musk once again roiled the market, saying via tweet that Tesla would allow transactions in Bitcoin once it is mined with more clean energy. The mogul said he wants miners, who have come under the spotlight in recent months, to use about 50% clean energy. The Cambridge Center for Alternative Finance has estimated that 39% of crypto mining is powered by renewable sources, mainly hydroelectric.

–With assistance from Kenneth Sexton.