Asian shares hovered near record highs on Monday while oil edged closer to $60 a barrel on hopes a $1.9-trillion COVID-19 aid package will be passed by policymakers in the United States as soon as this month just as coronavirus vaccines are being rolled out globally.

MSCI’s broadest index of Asia-Pacific shares outside Japan was last up 0.3 percent at 717.2 after climbing as high as 730.16 late last month.

Hopes of a quicker economic revival and supply curbs by the Organization of Petroleum Exporting Countries and its allies pushed oil to its highest level in a year as it edged towards $60 a barrel.

Global equity markets have scaled record highs in recent days on hopes of a faster economic revival led by successful vaccine rollouts and expectations of a large US pandemic relief package.

On Friday, the Nasdaq and S&P 500 hit all-time highs on stronger-than-expected corporate results in the fourth quarter of 2020 and as companies appeared to be on track to post earnings growth for the first quarter of 2021 instead of a decline. 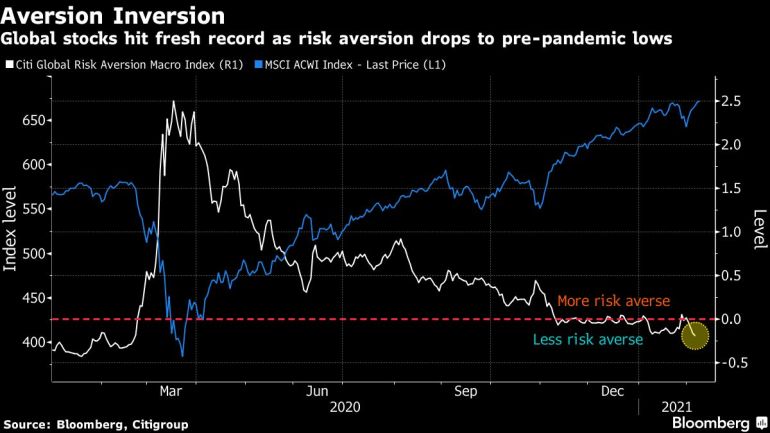 The rallies came even as US data painted a dour picture of the country’s labour market, with payrolls rising by 49,000, half of what economists were expecting.

Biden and his Democratic allies in Congress forged ahead with their stimulus plan on Friday as policymakers approved a budget outline that would allow them to muscle through in the coming weeks without Republican support.

US Secretary of the Treasury Janet Yellen predicted the US would hit full employment next year if Congress is able to pass its support package.

“That’s a big call given full employment is 4.1 percent, but one that will sit well with the market at a time when the vaccination program is being rolled out efficiently in a number of countries,” said Chris Weston, Melbourne-based chief strategist at Pepperstone.

Expectations of a US economic recovery have not boosted the US dollar, however, “because this shift in prospects is seen by the market as part of a global recovery,” Westpac economists wrote in a note.

“Investors therefore favour risk-taking, and so value the safety of the US dollar less.”

Indeed, the greenback fell below a four-month high against the Japanese yen to be last traded at 105.49.

The risk-sensitive Australian dollar eased from a one-week high to $0.7675.