Shut out of the global financial system, Iran is inching closer to a workaround to US sanctions with the possible unveiling of its first state-backed cryptocurrency in the near future.

The virtual currency is anticipated to be announced at the annual two-day Electronic Banking and Payment Systems conference, which kicks off on January 29 in the capital, Tehran. The theme of this year’s gathering is “blockchain revolution”.

The blockchain is a fixed distributed ledger technology that allows a network of computers to verify transactions between two parties, as opposed to validating them through a trusted, third-party entity.

The biggest blow to Iran’s economy came in November, when some of its banks were barred from SWIFT, the Belgian-based global messaging system that facilitates cross-border payments.

Countries excluded from SWIFT cannot pay for imports or receive payments for exports, leaving them crippled financially, and having to rely on alternative methods of moving money.

Iran’s cryptocurrency is expected to be rolled out in phases, first as a rial-backed digital token, to facilitate payments between Iranian banks and other Iranian institutions active in the crypto space, and later possibly as an instrument for the Iranian public to pay for local goods and services.

While it would not directly facilitate payments between Iran and other countries, the state-backed digital currency could lay the groundwork for Iran to join a blockchain-based international payments system that could emerge as an alternative to SWIFT.

There is no official confirmation of active participation between Iran and other nations in this area, or when any potential multilateral initiatives will yield results, but developments in recent months provide clues.

On November 5, the day the second tranche of US sanctions against Iran came into effect, the Governor of the Central Bank of Iran, Abdolnasser Hemmtai, said the regulator has already commenced work on an alternative in anticipation of the SWIFT disconnect.

On the other hand, during the ChainPoint 18 conference in Yerevan, Armenia on November 14, Iran signed a trilateral blockchain cooperation agreement with Russia and Armenia.

Following the finalisation of the agreement, the Russian signatory Yuri Pripachkin, who heads the Russian Association of Cryptoindustry and Blockchain, said, “According to our information, an active development of an Iranian version of SWIFT is currently under way.”

Given the long ties between Tehran and Moscow, and the fact that both are sanctioned by the US, it stands to reason that they would eye blockchain technologies to overcome financial restrictions.

Member states of the Commonwealth of Independent States (CIS) are other likely parties to a potential blockchain-based multilateral financial system.

Following in the footsteps of regional rivals Saudi Arabia and the United Arab Emirates, who recently launched a joint cryptocurrency, Iran could also use the crypto-rial or a similar sovereign digital currency to skirt sanctions and trade with other partners.

The Blocking Iranian Illicit Finance Act that was introduced by Senator Ted Cruz on December 13 to sanction Iran’s upcoming sovereign cryptocurrency identifies the governments of China, Russia, Venezuela and Turkey as potential state actors that might aid it in developing the crypto-rial.

Beyond facilitating payments as part of bilateral or multilateral agreements with strategic partners, the crypto-rial will fall short of combating US restrictions.

Coupled with the digital currency’s centralised nature, the sanctions will ensure it will have no place in credible international exchanges. It will fail to give ordinary Iranians an international reach they have been bereft of for decades, just like the fiat currency it is backed by.

That being said, a digital rial will certainly have local advantages. As blockchain and cryptocurrency developer Yashar Rashedi pointed out, one has to note that central bank cryptocurrencies (CBCCs) are not aimed at replacing common cryptocurrencies.

“They certainly can’t replace the likes of bitcoin due to their centralised nature, but their existence is harmless,” he told Al Jazeera.

“Even as CBCCs may never find widespread everyday use among the general public, they may be able to offer some new features to startups and developers that had to work with centralised bank APIs before them.”

Iran’s official stance on crypto has changed and evolved to give authorities more control over how blockchain technology is integrated into the country’s economy.

Last April, with the reinstatement of US sanctions looming, Iran issued a blanket ban prohibiting all financial institutions from handling cryptocurrencies, citing concerns over money laundering and other criminal activity.

But the move was also interpreted as an attempt by authorities to prevent capital flight as the Iranian rial plunged to an all-time low.

The same month, officials revealed Iran’s plans for a state-backed cryptocurrency were still on track and that it was working to establish a regulatory framework for crypto.

Officials have since indicated the new regulatory structure could greenlight cryptocurrency “mining” as an industry and possibly license crypto exchanges.

The framework is expected to be announced by the end of the current Iranian year in late March, according to central bank officials.

State-backed cryptocurrencies are a far cry from the decentralised financial revolution originally envisioned by crypto-pioneers who were early to embrace bitcoin, the most well-known digital currency.

Bitcoin is not controlled by any state or central authority and offers anonymity to those using it for peer-to-peer transactions. A decentralised network of computers spread across the globe verifies bitcoin transactions and mines new bitcoins.

By contrast, Iranian officials have announced that the country’s virtual currency will be controlled by the central bank and built on a private blockchain infrastructure that could not be mined.

Iran is not the first government to attempt to co-opt the crypto space to help its ailing economy.

Venezuela launched a controversial, state-backed cryptocurrency, the petro, last year. Allegedly backed by the country’s oil reserves, the petro has been widely derided.

The Trump administration banned trade in the Venezuelan petro.

While Iran’s digital currency faces many hurdles, some of the country’s crypto enthusiasts believe the government’s embrace of blockchain could create a more fertile environment for the sector.

“It will create the possibility of tokenising things and may increasingly bring the general public into the fold in terms of online exchange of money, something that will end up to the benefit of entrepreneurs,” Tehran-based millennial blockchain entrepreneur Amir Habibzadeh told Al Jazeera.

“On the other hand, moving toward blockchain-based transactions will ultimately mean real-time clearance and will open up possibilities for replacing the incumbent SHETAB interbank payment system with a blockchain-enabled alternative,” he said.

Soroush Hakimi, a 26-year-old Iranian neuropsychologist working to develop a blockchain-based crowdfunding platform, is hopeful the country’s regulators would not stifle innovation.

“I’m very hopeful about the future,” he told Al Jazeera.

“Startups working in this field have established a good benchmark while research groups and blockchain labs at universities have significantly grown, so I see both the government and academia honing in on blockchain technologies.” 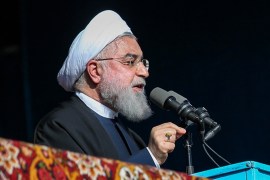 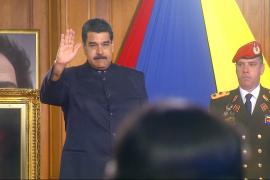 Venezuela is launching a cryptocurrency backed by oil, gas, gold and diamonds. President of Venezuela Nicolas Maduro announced on Sunday the launch of the “petro” backed by oil reserves to try and alleviate an economic crisis and food shortages.