At least three Pakistan airline employees have been killed and several others injured after clashes broke out between police and workers protesting against the privatisation of the national carrier, hospital officials said.

A spokesman for Karachi’s Agha Khan hospital told Al Jazeera that one of the protesters, identified as Inayat Raza, an employee of Pakistan International Airlines (PIA), died of a gunshot wound during Tuesday’s protest.

“The PIA employee was brought dead to our emergency department,” he said. “He died of a gunshot to his head. His family has identified him as well.”

Police and paramilitary rangers deployed tear gas and water cannon against the protesters after they blocked the main entrance to Karachi’s Jinnah International Airport earlier on Tuesday.

Law enforcement agencies denied that they had opened fire on protesters.

“The situation escalated when a couple of gunshots were fired. My officers told me that they might be fired from the crowd,” said Kamran Fazal, the police chief of the city’s eastern district.

“We are searching for the empty shells and only then can we establish who opened fire.”

The PIA employees’ union had announced a day earlier its plans to shut down the airline’s flights after a weeks of strikes against government proposals to complete the partial sale of the carrier by July.

The move follows years of crushing losses and mismanagement that have battered the airline’s reputation.

PIA, one of the world’s leading airlines until the 1970s, now suffers from frequent cancellations and delays and has been involved in numerous controversies over the years, including the jailing of a drunk pilot in Britain in 2013. 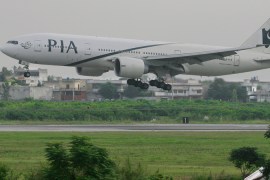 Emirates cancels flights to Peshawar and two other carriers divert planes as search continues for attackers. 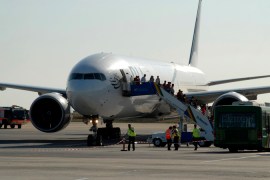 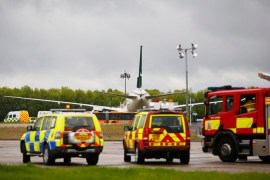 US slaps sanctions on DRC national over Gertler ties