Andy Hall, 35, could face up to seven years in prison if found guilty of criminal defamation by publication and offences under the country’s Computer Crimes Act.

The case is one of four criminal and civil cases brought by the Natural Fruit Company following Hall’s research into the firm. The civil cases carry fines of up to $12.5m.

Hall’s interviews with migrant workers from neighbouring Myanmar found evidence of labour trafficking, child labour, violence against workers, and other abuses at its plant in the central province of Prachuap Khiri Khan.

The research was carried out on behalf of the Finnish NGO Finnwatch. Its executive director Sonja Vartiala said the charges against Hall were unfounded and called on Thailand to abolish its criminal defamation laws, “as they infringe on freedom of expression”.

“At this point, the prospects for Andy Hall to receive a fair trial are looking grim,” she added.

The Bangkok South Criminal Court ordered Hall to enter a plea on October 19, when he faces detention but can request bail.

Hall is backed by international human rights groups, trade unions, and the Thai seafood industry, which has itself come under fire for alleged human rights abuses.

“They are all against it. These people [Natural Fruit] are just stubborn,” Hall told Al Jazeera. “I respect the decision of the court, but I will fight the case and hopefully win it.”

The other criminal case against Hall was dismissed by a court in October last year, but the company and Thailand’s attorney-general have appealed against that decision. The outcome of the appeal will be announced next month.

Critics say the ongoing cases against Hall show the difficulties for human rights activists of working in Thailand, and how the laws on criminal defamation are used to bully and silence critics of the rich and powerful.

Two journalists for news website Phuketwan – Thai national Chutima Sidasathian and Australian Alan Morison – are being sued by the Thai navy for republishing part of a Pulitzer-winning story about Myanmar’s Rohingya boatpeople from the Reuters news agency. The verdict in that case is due on September 1.

“By prosecuting Andy Hall for his involvement in a report on the Natural Fruit Company, the Thai government has declared open season on NGOs involved in protecting migrant workers and stopping human trafficking,” Phil Robertson, deputy director of the Asia Division at Human Rights Watch, told Al Jazeera.

“Companies around the world seeking to ensure their supply chains are free of rights abuses need to ask hard questions to Bangkok’s leaders about why they are gagging this independent researcher and rights advocate.” 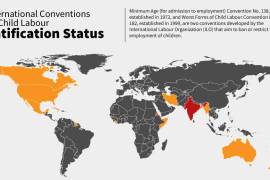 Child labour: Where do countries stand?

A number of countries around the world have not yet ratified international child labour conventions. 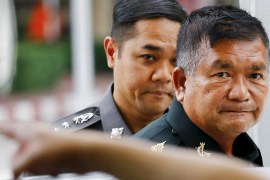