Greek banks have reopened their branches across the country after a three-week shutdown, but many restrictions, including cash withdrawals, will remain, officials said.

The reopening of the banks at 8am local time on Monday, along with the implementation of austerity measures such as a significant increase in value added tax (VAT) on basic food products and services, came after an aid-for-reforms deal last week averted bankruptcy.

“Capital controls and restrictions on withdrawals will remain in place but we are entering a new stage which we all hope will be one of normality,” the head of Greece’s banking association Louka Katseli told Skai television.

Greeks will be able to withdraw $455 a week at once instead of just $65 a day, but the limit will effectively remain the same and capital controls will also stay in place.

Bank customers will still not be able to cash checks, only deposit them into their accounts, and will not be able to get cash abroad with their credit or cash cards, only make purchases. There are also restrictions on opening new accounts or reactivating dormant ones.

Among the goods that Greeks will find more expensive on Monday are some meats, coffee, tea, cooking oils other than olive oil, cocoa, vinegar, salt, flowers, sanitary towels, condoms, firewood, fertiliser, and insecticides. All these will see the VAT rise from 13 percent to 23 percent.

Services whose VAT also goes up from 13 percent to 23 percent include restaurants and cafes, funeral parlours, taxis, cramming and tutorial schools – very popular with Greek students who want to make up for the deficiencies of the school system – language institutes and computer learning centres. Public transport fares are expected to rise early next month.

“That’s not a normal life so we have to negotiate quickly,” Merkel said in extracts from an interview with German public broadcaster ARD.

Merkel also said it would be possible to talk about changing the maturities of Greece’s debt or reducing the interest Athens has to pay after the first successful review of the new bailout package to be negotiated.

Greece closed its banks beginning on June 29 to prevent a bank run after the European Central Bank (ECB) did not increase emergency funding as Greece’s second bailout expired. After the Greek parliament passed an agreement on Thursday to seek a third bailout, the ECB raised its emergency funding to the cash-strapped Greek banks.

Also, on Friday, the EU decided to release a short-term loan of $7.8bn to help Greece pay back a loan due on Monday to the ECB plus arrears owed to the International Monetary Fund. 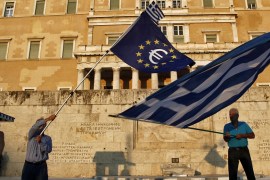 Greek crisis: What next? 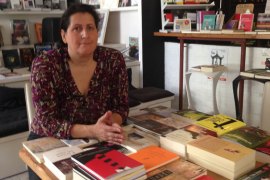 Shop in Athens strives to revive public intellectual discussions that have largely faded during economic crisis. 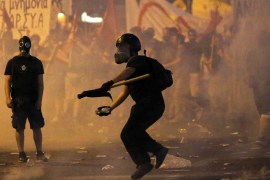