Abdul Qadir Fitrat, the central bank governor, said officials stepped in on Tuesday to take control of the country’s biggest private financial institution “for the foreseeable future”, because of suspected irregularities.

The Kabul Bank’s two most senior directors now being investigated, he said.

He said that they have been forced to resign.

A brother of Mohammad Qasim Fahim, Afghanistan’s first vice-president, is also under investigation, the governor said.

Afghanistan had previously frozen the assets of leading shareholders and borrowers at Kabul Bank, whose customers include about 250,000 state employees.

Corruption is one of the most common complaints from ordinary Afghans and Washington fears widespread corruption is boosting the Taliban-led armed campaign and complicating efforts to strengthen central government control so that US and other foreign troops can begin withdrawing.

Long queues of jittery customers have formed at the bank’s branches since it became known in early September that two directors, who each own a 28 per cent stake in Kabul Bank, had quit. 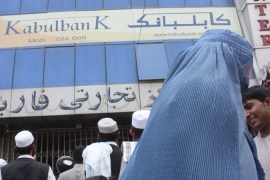 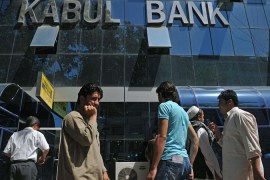 Nervous customers of Kabul Bank withdraw their savings amid fears of possible collapse.