Who: Tunisia vs Australia, Group D

Saturday’s game is the third meeting between Tunisia and Australia, with both sides having won one of the previous two. Australia beat the Carthage Eagles 3-0 in a 1997 friendly, but it was a reversal of fortunes for the latter at the 2005 FIFA Confederations Cup where they beat Australia 2-0.

After a goalless draw in their opening fixture against Denmark, semi-finalists at the last European Championships, Tunisia have secured their second clean sheet out of a total of 16 World Cup matches.

They are competing in the finals of the World Cup for the sixth time in their history, and they are looking to reach the knockout round of the competition for the first time.

Coach Jalel Kadri is likely to retain most of Tunisia’s starting XI against Denmark, as there are no new injury concerns.

Wahbi Khazri was a surprise omission for Tunisia in that game. But as the team’s leading goal scorer, the experienced attacker should return to the starting eleven against Australia. The 31-year-old will likely replace Anis Ben Slimane, joining Youssef Msakni and Issam Jebali in a show of more pronounced attacking ambition. 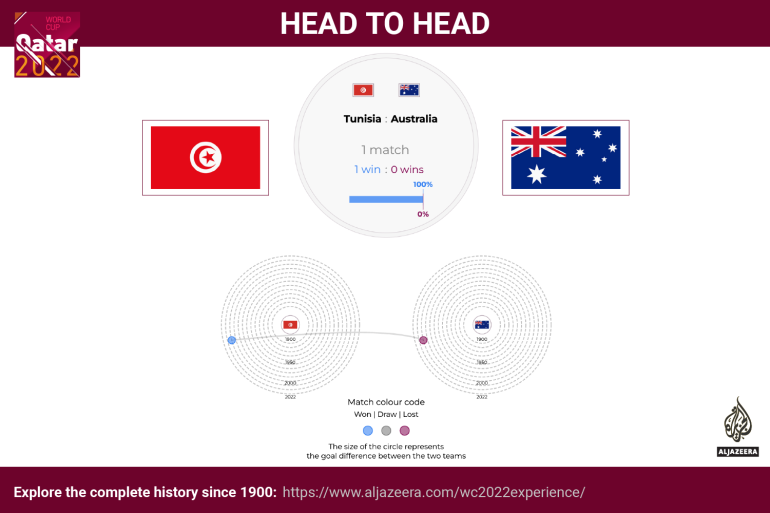 Captain Msakni made his mark against Denmark, and is expected to be instrumental in the final third against Australia along with his strike partners.

And 19-year-old Manchester United midfielder Hannibal Mejbri will be hoping to play more minutes, after being brought on as a late substitute against Denmark.

Tunisia’s last and likely toughest game at the group stage will be against France next Wednesday, so their chances of qualifying for the knockout round could largely depend on their result against Australia.

In their opening game, the Socceroos were at the receiving end of a 4-1 drubbing by Les Blues, and if they lose again on Saturday, they will have crashed out of the World Cup at the group stages for a record third time after 1974 and 2014.

Australia, who have lost 11 of their 17 games at the World Cup and have failed to win in their last seven outings on this stage – their longest winless streak in the competition.

Still, coach Graham Arnold is not expected to make any radical changes to his team. Captain and goalkeeper Mathew Ryan is expected to have a better command of his box and better protection from his defenders this time.