What started on June 11 ends tonight: Italy take on England at Wembley Stadium in London in the final of the 2020 European Championship.

Both sides aim to end long droughts when they meet on Sunday.

Gareth Southgate’s England hope that a partisan home crowd will help them lift a first major trophy since winning the 1966 World Cup at the old Wembley.

Italy have not won the Euros since 1968 and Roberto Mancini’s team has impressed at least as much as England in the tournament held over four weeks in 11 European cities.

The Azzurri are on an unbeaten run of 33 games since September 2018 and have never lost against England at a major event.

Italy have never lost against England at a major tournament.

After England were given a rousing send-off, with fans lining the streets on the journey from their St George’s Park base to the team hotel on Saturday, Southgate urged England to harness the outpouring of emotion into a winning formula in the final.

“The players need to feel that warmth and support. It has definitely helped inspire us. We’re in a final and we are here to win,” said Southgate. “Now we want to go and bring the trophy home for everybody.”

Southgate has revolutionised English football since taking charge in 2016 and his team has impressed in Euro knockout stage wins over Germany, Ukraine and Denmark.

But England were beaten in the 2018 World Cup semi-finals by Croatia and only a final triumph against Italy will be enough to satisfy them now. 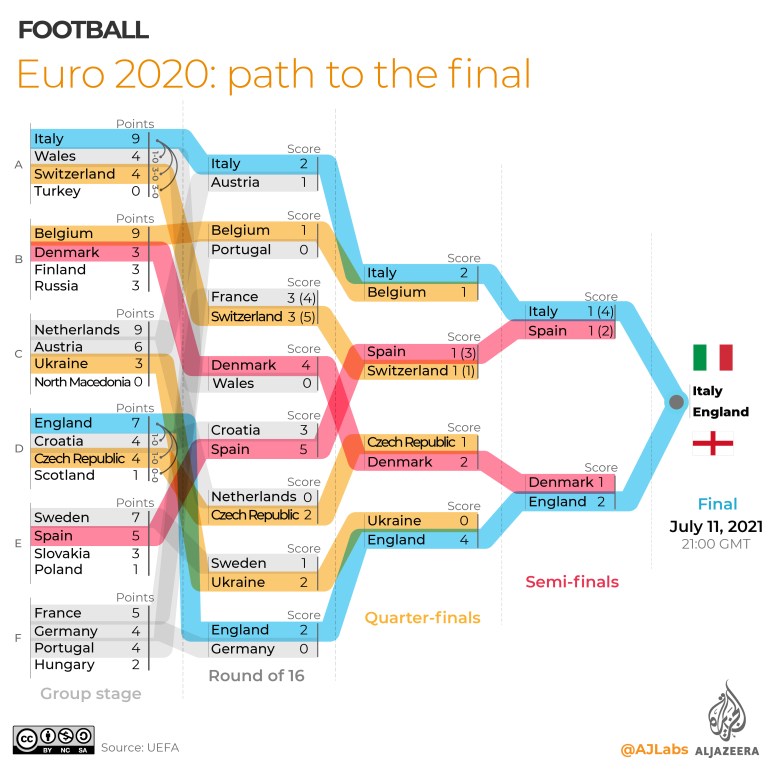 Best team of the tournament?

Italy have been arguably the team of the tournament, sweeping through the group stage with a perfect record before knocking out Austria, top-ranked Belgium and Spain to reach the final.

Revitalised since Mancini took over after their embarrassing failure to qualify for the 2018 World Cup, the Azzurri are on a remarkable 33-match unbeaten run.

Veteran defender Giorgio Chiellini called on his team-mates to stay focused, with the trophy within touching distance.

“We need to thrive and savour this occasion. When we met up before the competition I said we needed just that hint of madness and to keep cool heads,” Chiellini said.

“That has brought us this far and hopefully it can take us to win the competition.” 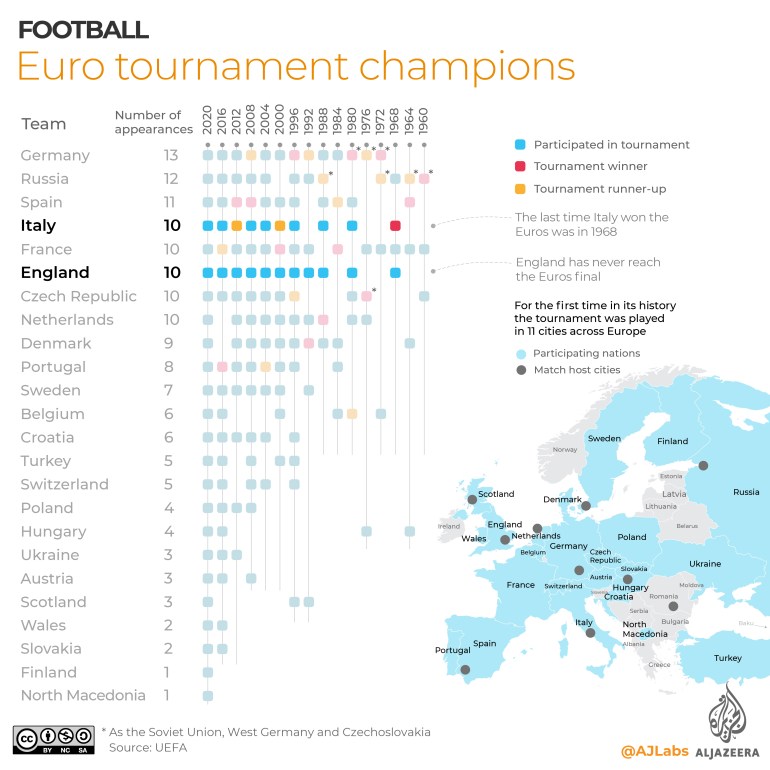 The British government is allowing 60,000 fans to attend the game but only 1,000 can travel from Italy under strict coronavirus rules – in a strict bubble and allowed to stay only 12 hours.

Another 6,500 tickets have gone to Italy fans living in the United Kingdom.

“So if we want to enjoy ourselves for another 90 minutes, we have to do so tomorrow. Then the Euros will finish and the guys will go on vacation.”

Southgate: “At the back of your mind you always have to have a bit of a vision on how you would like to see the end and play that out. But the reality is you have to focus on the processes and focus on the performance and that’s what we have always done with this team.

“It’s important the players have an understanding of that. Whatever path the game takes, they are prepared and they are ready. If you start to think about the end then you’re probably heading in the wrong direction and we’ve just got to control the bits we can control.”