The reigning German champions announced on Tuesday that the 33-year-old Nagelsmann will move to Bayern on July 1 with a contract that runs through 2026. Bayern said it agreed to terminate Flick’s contract after he asked to be released early, after his relationship with the club’s powerful sporting director Hasan Salihamidzic has deteriorated over transfer policy.

“The position at FC Bayern is a unique opportunity for me. I would therefore like to thank Oliver Mintzlaff and the rest of the board at RB Leipzig for finding a solution with FC Bayern and making this possible for me,” Nagelsmann said.

“I had requests from other clubs but I refused,” he said, before repeating his “lifelong dream” was to coach Bayern.

Nagelsmann has been with RB Leipzig for three years and led the team to the Champions League semi-finals in 2020. Leipzig is in second place behind Bayern in the Bundesliga standings and has reached the semi-finals of the German Cup.

Several German media outlets have estimated the fee at between 20 million euros ($24.2m) and 30 million euros ($36.2m), including bonuses, which would make him the most expensive coach in football history.

Although he would not confirm these figures, Mintzlaff suggested that they were accurate.

“We do not deny the rumours that are circulating,” Mintzlaff said.

Nagelsmann grew up near Munich and came through the youth system at another club in the city.

His professional football career as a player ended early due to knee injuries, but at age 28, became the youngest head coach in league history when he took over at Hoffenheim in 2016. The team then qualified for the Champions League for the first time in its history.

“Julian Nagelsmann signifies a new generation of coaches,” Bayern President Herbert Hainer said. “Despite his young years, he has already built an impressive career. We are convinced that we will build on the great successes of recent years together with Julian Nagelsmann.”

“I am convinced that Bayern’s sporting future will be a very successful one with Julian Nagelsmann,” Oliver Kahn, the club’s former goalkeeper who will succeed Karl-Heinz Rummenigge as Bayern chairman next year, told the club’s website.

Bayern was forced to look for a new coach after Flick said this month he wanted to leave the club despite having a contract through 2023. Flick won the league, German Cup and Champions League last season with Bayern and is on the verge of another league title.

However, as reports of a rift between Flick and Salihamidzic emerged, Bayern were knocked out of the Champions League in the quarter-finals by PSG earlier this month.

Bayern will secure the Bundesliga title if it wins its next game on May 8 against Borussia Monchengladbach or if Leipzig loses to Borussia Dortmund the same day.

Bayern initially appointed Flick in 2019 as an interim coach when Niko Kovac was fired. He was supposed to step in for a few weeks but the team’s winning run meant he was given an extension, first until the end of the 2019-20 season, then until 2023.

Flick has not been able to celebrate any trophies in front of the team’s fans because of the pandemic. Only the European Super Cup in Hungary and Club World Cup in Qatar were won in front of small numbers of supporters.

“One tinge of sadness remains, that we could not celebrate the great successes during this period with the fans. I’ve missed you in every match,” Flick said in a statement from Bayern.

“The last two years will be unforgettable for me. The emotions, the wins, the titles, but also the day-to-day work on the pitch have been a lot of fun for me, it’s been an amazing time.”

The 56-year-old has been linked with the German national team job, which will be vacant once Joachim Low steps down after this year’s European Championship. Flick was Low’s assistant from 2006 until Germany won the World Cup in 2014. 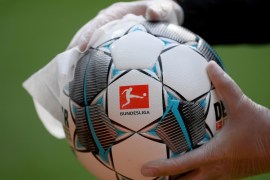 BeIN Sports walks away from renewal talks with Bundesliga 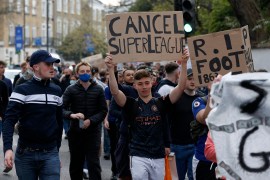 The moves suggest the project to launch the controversial European Super League could be unravelling. 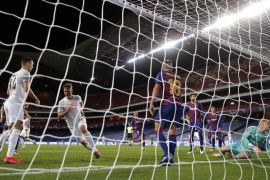 Five-time winners left without answers after German side’s ruthless display dumps them out of the Champions League.