Qatar is preparing to honour its national football team with a street parade in Doha following the Gulf nation’s upset victory at the AFC Asian Cup in the United Arab Emirates (UAE).

The Maroons are set to land at Doha’s old airport at 15:30 GMT on Saturday, where the Emir of Qatar Sheikh Tamim bin Hamad Al Thani is expected to welcome the team.

The players and entourage will then parade through the capital’s Corniche to Sheraton Park in the city’s high-rise West Bay area, where the Qatar Football Association, in a Twitter post, called on fans to gather.

The Qatari team will arrive in Doha via Oman, as direct flights between Qatar and Asian Cup host UAE remain banned due to a nearly two-year blockade imposed on Doha by its Gulf neighbours.

Qatari football fans were barred from attending the tournament because of the bitter political rift and their national team was forced to play almost entirely without supporters. In the match against the UAE, a hostile local crowd hurled shoes and water bottles at the Qatari players.

The capital’s streets were gridlocked with cars as citizens and residents draped in Qatar’s maroon and white flag hung out of car windows or hopped on to rooftops, horns blaring in celebration.

“This is the first continental cup we have taken and it’s despite all the pressure that was put on this team, which just proves that they are heroes,” he said in Doha.

The Asian Cup victory will give Qatar renewed hope of being able to compete against the globe’s best teams when it participates for the first time in the World Cup – as hosts – in 2022.

“Today we made history for our country, we need to be very proud about our achievement,” said Qatar coach Felix Sanchez.

Qatar raced into the lead when Almoez Ali put the ball into the net with a spectacular bicycle kick in the 12th minute.

Ali’s early goal, his ninth in the tournament, took him past Iranian Ali Daei’s 1996 tally. And combined with a 27th-minute long-distance strike from Abdulaziz Hatem and a late Akram Afif penalty, it helped the Qataris claim their first continental title.

Sudan-born Ali’s record goal came after a protest by the UAE over his eligibility to represent Qatar was dismissed by the Asian Football Confederation (AFC) only a few hours before kickoff.

After upsetting the final favourites, the players wrapped themselves in Qatari flags in a display of patriotic furore.

“This result doesn’t come from nothing,” said defender Bassam al-Rawi, the other player whose eligibility was questioned by the UAE.

“It came with a lot of effort. It came from determination. It came from immense hard work on the pitch. We were able to win today because we took all the chances.”

The victory was also celebrated wildly by thousands of Omanis who had turned out to support Qatar in the absence of their own fans.

Since joining other Arab countries in cutting diplomatic, economic and travel ties with Doha in 2017, the UAE has warned residents that expressing sympathy for Qatar could lead to fines and imprisonment.

The UAE is among a quartet of nations accusing its regional foe of supporting “terrorism”, which Qatar denies, and even prevented the team from travelling directly to Abu Dhabi for the tournament.

After their stunning win, the Maroons travelled to Sohar in Oman via bus, where they were greeted by hundreds of cheering fans, according to videos posted on social media.

Al Jazeera’s Andy Richardson, reporting from Doha, said: “It’s hard to overstate the level of achievement that the Qatar team has pulled off. They came into this tournament without any real track record of success at the Asian Cup.”

“There were signs of a young team on the rise even ahead of this success. The vast majority of this team came through the Aspire National Academy here in Qatar – a hugely ambitious project set up in 2004 to identify and nurture young talent,” he added. 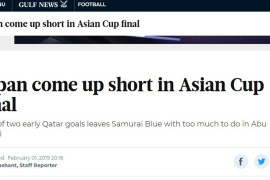 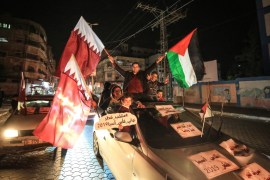 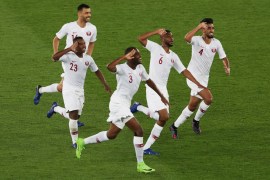 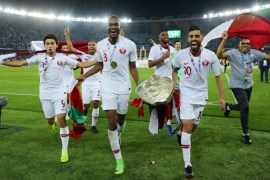