Brazil has arrested 10 people on suspicion of supporting the Islamic State of Iraq and the Levant (ISIL, also known as ISIS) group and allegedly planning to target next month’s Olympics in Rio de Janeiro, Justice Minister Alexandre Moraes said.

The loosely organised group was made up of Brazilian nationals who kept in contact via internet messaging groups such as WhatsApp and Telegram, but did not know each other personally, the minister said on Thursday.

The group did not have direct contact with ISIL, though some of its members had made “pro forma” declarations of allegiance to the armed group, the minister said.

“Those involved participated in an online group denominated ‘the defenders of Sharia’ and were planning to acquire weapons to commit crimes in Brazil and even overseas,” Moraes told a news conference.

“It was an absolutely amateur cell, with no preparation at all, a disorganized cell,” the minister said, adding that authorities decided to intervene when the group started to plan actions.

He said members of the group had visited a weapons site in neighbouring Paraguay which sells AK-47 assault rifles, but there was no evidence they had acquired any weapons. Two people will be brought in for questioning, in addition to the 10 already detained, he added.

“Police have confiscated their phones, their computers, and now [they] are prioritising the investigation [to understand] whether there are more people involved in this,” Al Jazeera’s Mariana Sanchez, reporting from Sao Paolo, said.

The minister said the leader of the group was based in the southern Brazilian city of Curitiba, with others spread in nine Brazilian states.

A court in the state of Parana, where Curitiba is based, said there were indications that the group was planning to use weapons to achieve its aim.

About 130 officers took part in the operation in which 10 were arrested and two more were temporarily detained, the statement said.

The arrests were made in conjunction with 19 searches conducted in states across the country, ranging from the Amazonas region to the financial capital of Sao Paulo to Rio de Janeiro, where the Olympics open on August 5.

Last week, Brazil said it was bolstering security for the August 5-21 Olympics following the deadly lorry attack in the French city of Nice, which killed 84 people and left scores badly wounded. The attack was claimed by ISIL. 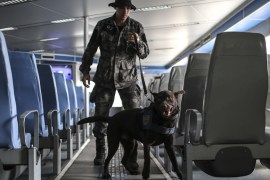 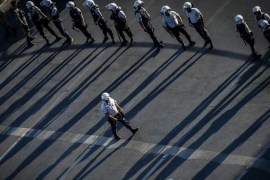 Brazil urged to end police brutality ahead of Olympics

Amnesty International urges authorities to end what it calls “a systematic use of excessive force in slums”.