A 10-strong refugee team is to compete at the Olympic Games in Rio de Janeiro later this year as “a symbol of hope,” the International Olympic Committee (IOC) said.

“These refugees have no home, no team, no flag, no national anthem. We will offer them a home in the Olympic Village together with all the athletes of the world,” IOC President Thomas Bach said on Friday following an executive board meeting in Lausanne, Switzerland.

Selected from 43 possible candidates, there are two Syrian swimmers, two judokas from the Democratic Republic of the Congo, and six runners from Ethiopia and South Sudan in the refugee team.

“They all fled violence and persecution in their countries and sought refuge in places as wide-ranging as Belgium, Germany, Luxembourg, Kenya and Brazil,” UNHCR said in a statement.

“The initiative to send a refugee team to the Rio Games is unprecedented and sends a strong message of support and hope for refugees worldwide.”

The first-ever refugee team will enter the opening ceremony in the Maracana Stadium before hosts Brazil and under the Olympic flag.

Throughout the Games, they will be treated as any other team, but will have expenses paid by the IOC.

The IOC said the athletes, six men and four women, were selected according to their personal circumstances, UN-verified refugee status and sporting ability.

“We are very inspired by the Refugee Olympic Athletes team – having had their sporting careers interrupted, these high-level refugee athletes will finally have the chance to pursue their dreams,” said UN High Commissioner for Refugees Filippo Grandi.

“Their participation in the Olympics is a tribute to the courage and perseverance of all refugees in overcoming adversity and building a better future for themselves and their families. UNHCR stands with them and with all refugees.”

The torch relay for the Olympic Games in Rio de Janeiro, which took place last month, also highlighted the plight of the refugees.

First, a Syrian refugee who was a sportsman before losing part of his leg in a bombing carried the Olympic flame through an Athens refugee camp.

Ibrahim al-Hussein, who has been given asylum in Greece, bore the torch through Eleonas camp.

A week later, a 12-year-old compatriot of Hussein, named Hanan Dacka, bore the the flame on the first stage of its relay across Brazil.

“The most important thing in sport is to have fun and make friends,” said Dacka, who now attends secondary school in Brazil.

“By carrying the Olympic Torch, people from all over the world will know that refugees are real people, and that we can do positive things,” she added. 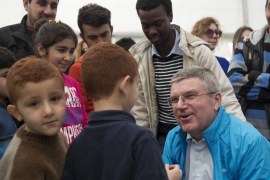 Refugee to carry torch to camp in Greece, while refugee athletes will march behind Olympic flag in Brazil. 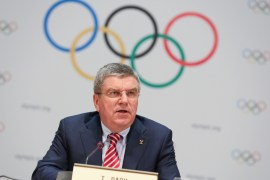