Muslims have travelled from all over the world to Louisville, Kentucky, to attend a traditional Muslim prayer service for Muhammad Ali, the record-setting world heavyweight champion, who died last week.

More than 14,000 people bought tickets for Thursday’s service in Kentucky Exposition Center, which will also be broadcast worldwide and streamed online, according to Ali’s wishes.

Organisers say the service is meant especially as a chance for Muslims to say goodbye to a man considered a hero of the faith.

“Muhammad Ali began his transition to becoming a Muslim in 1964 when he was 22 years old,” said Al Jazeera’s Gabriel Elizondo reporting from Louisville.

“For over 50 years he has been one of the most recognisable Muslims, at least in the US.”

US Muslims hope the service for the boxing legend will help underscore that “Islam is fully part of American life”.

“Muhammad planned all of this,” said Imam Zaid Shakir, a prominent US Muslim scholar who will lead Thursday’s prayers.

“And he planned for it to be a teaching moment.”

A global representative of the faith

Ali, who died on Friday at 74, famously joined the Nation of Islam, the black separatist religious movement, as a young boxer, then embraced mainstream Islam years later, becoming a global representative of the faith and an inspiration to Muslims.

“One reason Muhammad Ali touched so many hearts, he was willing to sacrifice the fame, the lights, the money, the glamour, all of that, for his beliefs and his principles,” Shakir told the Associated Press news agency.

“That’s moving and that touches people.”

Timothy Gianotti, an Islamic scholar at the University of Waterloo in Canada, worked for years with the Ali family to plan the remembrances.

OPINION: Why we mourn Ali

Gianotti said that he and three others – two Phoenix-area Muslims and Imam Shakir – washed, anointed and wrapped Ali’s body. In Islam, the body is typically wrapped in three pieces of simple fabric.

He said the service would consist of short, standing prayers said over the body, which will be in a coffin facing Mecca.

The traditional Muslim Jenazah service lasts only a few minutes, with people customarily standing in lines as they recite prayers.

At Ali’s service, Muslims lining up to join the recitation will be separated by gender, but the wider audience will not, Gianotti said.

The faithful will stand shoulder-to-shoulder, row after row, Gianotti said.

The service is composed of four recitations of “Allahu Akbar” or “God is Great”, with silent prayers in between a reading from the first chapter of the Quran, a blessing for Abraham, a general prayer for the well-being and forgiveness of the deceased for the next life, and a prayer for everyone at the funeral, Gianotti said.

It will take about 15 to 20 minutes, with additional remarks from prominent Muslims in attendance.

An interfaith memorial service is planned for Friday, which will include representatives of several religions, including Jews and Christians.

Muslim organisations are asking mosques around the country to participate by saying a special prayer for Ali this week.

Tickets are still available for the Thursday service, but all 15,500 tickets for Friday’s memorial at the KFC Yum! Center in Louisville were claimed within an hour. 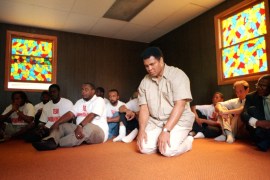 At a time when Muslims in the US are facing scorn and bigotry, the boxing legend is remembered as the face of Islam. 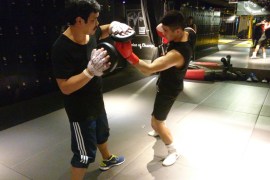