Chris Froome’s hopes of pulling off a rare Tour de France-Vuelta double are over after he was forced to withdraw before Thursday’s 12th stage after a heavy crash on Wednesday left him with a fractured bone in his foot.

The twice Tour winner and Team Sky leader fell heavily at the start of the brutally mountainous 11th stage in the Pyrenees and eventually limped across the line more than seven minutes behind new Vuelta leader Fabio Aru of Astana.

“End of the Vuelta for me.”

Froome appeared close to pulling out when he was dropped from the group of main contenders with three of the six climbs remaining in the punishing 138km Queen stage, billed as one of the toughest set in a grand tour.

But the 30-year-old, who said he was knocked sideways into a barrier and wall in the crash, doggedly continued with the help of his team mates and managed to finish.

However, after losing so much time, and with 10 stages remaining, Froome’s hopes of emulating Frenchmen Jacques Anquetil (1963) and Bernard Hinault (1978) as the only men to win the Tour and Vuelta in the same year were clearly over.

“I’m really gutted to be leaving the race but the injuries that I sustained on yesterday’s stage were too much to continue,” Froome said on Sky’s website on Thursday.

“I hit my right side heavily and the main impact went on my right foot,” he added.

“I was desperate to dig in and finish the stage and my team mates did brilliantly to get me through it, but as soon as I got off the bike I couldn’t put any weight on my right side.

“An MRI scan has shown that I have fractured navicular bone in my right foot, so now I’ll work with our medical team on making a full recovery. I’ll be back soon.” 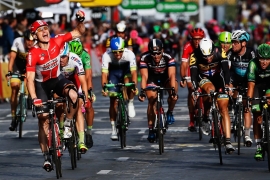 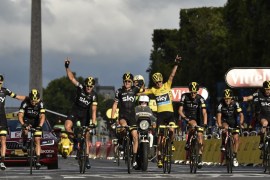 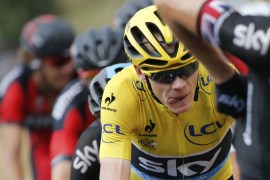 Rider says spectator yelling “doper” threw a cup of urine at him, despite his repeated assurances that he is drug free.