Froome blamed “very irresponsible” reporters for whipping up public opinion against him and his Sky team.

Some 50km into the stage from Rodez, the yellow jersey wearer said he spotted a roadside spectator acting bizarrely.

“I saw this guy just peering around and I thought, ‘That looks a bit strange’,” he said.

“As I got there he just sort of launched this cup toward me and said (in French) ‘Doper’.

“No mistake, it was urine,” he said. “That’s unacceptable on so many levels.”

Just as he did in winning the Tour for the first time in 2013, Froome has faced pointed questions about his dominant performance – and that of his team – along with insinuations of doping.

His Sky teammate Richie Porte said another person, also seemingly a spectator, thumped him with a “full-on punch” a few days earlier on a climb in the Pyrenees. Porte suggested journalists may be putting riders in danger by “whipping up all the rubbish that they are”.

“I certainly wouldn’t blame the public for this,” he said. “I would blame some of the reporting on the race that has been very irresponsible.

“It is no longer the riders who are bringing the sport into disrepute now, it’s those individuals, and they know who they are.”

He refused to identify specific journalists or reports, but said: “They set that tone to people and obviously people believe what they see in the media.”

Generations of dopers, none more famous than Lance Armstrong, have left trust in short supply in cycling and Froome’s repeated assurances that he is clean have fallen on deaf ears.

“If this is part of the process we have to go through to get the sport to the better place, obviously I’m here, I’m doing it,” he said. “I’m not going to give up the race because a few guys are shouting insults.”

“Unfortunately this is the legacy that has been handed to us by the people before us, people who have won the Tour only to disappoint fans a few years later,” he added.

Although such assaults remain rare, Froome is not the first rider in Tour history to have been doused by urine, nor is Porte the first to be punched.

The incident put a dampener on a day when Froome extended his already comfortable race lead, with the Alps looming next week as the last major obstacle between him and a second victory in Paris. 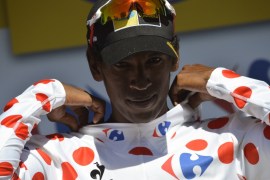 Team founder says team refuses to let the racist incident overshadow the gains made by African riders at competition. 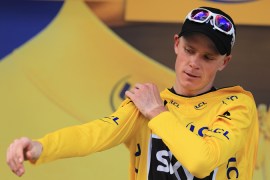 Froome rides to stage win and into yellow 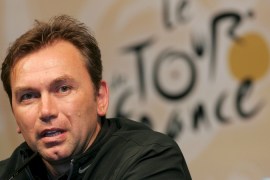