For Odion Ighalo, growing up in an Ajegunle ghetto, one of the poorest and toughest neighborhoods of Lagos, was loaded with difficulties.

But after scoring 20 goals in the Championship to help Watford secure promotion to the English Premier League last season, Ighalo became the latest footballer with an astonishing rags-to-riches story.

The Nigerian has had to do it all the hard way.

With harsh economic and social conditions, Ighalo did not have the best environment to nurture his footballing talent.

Clustered houses with electricity shortage, dirty storm drains, flooded roads frequented by potholes and plastic bags meant unemployed youths were destined for a life in the crime world than a career in football.

Ighalo’s house was next to a filthy drainage canal which separated the affluent upper-class of Apapa and the poor lower-class of Ajegunle.

“Life in Ajegunle was tough, we had no idea what the future would hold but we would wake up every morning content with the opportunity of another day,” Ighalo told Al Jazeera.

“I’m the youngest [with twin sister Julieta] in a family of seven kids. We hoped for a better life. We would stand by the canal, look across it and pray for a miracle that will take us out of the ghetto.”

Ighalo’s parents warned the kids of the paths ‘leading to hell’ if they did what other youth were used to doing: smoking marijuana and stealing.

“The little house we lived in was built by my father and he made sure we didn’t starve like other kids.

He often said ‘a hungry child will be tempted to steal and a homeless one will seek shelter with the area boys’.

“There are no yardsticks to measure hardship.”

Blessed with exceptional pace and ball control at an early age, Ighalo quickly realised football was his only way out of the ghetto.

Feature: The price of an African footballer’s dream

And he had the example of former Nigeria international strikers Samson Siasia, Jonathan Akpoborie and defender Ifeanyi Udeze to follow.

“Growing up, we kicked cans, oranges and plastic bags on the street. If we were lucky, someone will bring a plastic ball for three-a-side.”

Despite the talent, Ighalo’s father banned his youngest son from playing football as a 12-year-old because of fear he would get caught up with criminal gangs on the streets.

“My father said football was for the area boys. He’d beat me up when I’d go out to play. Luckily my mother stood by me.

“From the little money she had, I got my first football boots and the cash to travel with the grassroot team [Olodi Warriors] for our matches.

“We earned no money. Instead, we paid for water and transportation.”

The Tolu field, which is called Maracana stadium, where the team used to train had a corner populated by marijuana-smoking gangs and notorious armed robbers with guns.

According to Ighalo, the police stormed the field during practice to raid which would often result in sporadic gunshots fired across.

“We’d run for cover because the chances of being hit by a stray bullet were high.

“You didn’t need extra motivation to succeed when you are born into the hardship and struggles of the ghetto.”

In 2006, aged 17, Ighalo impressed in a Warriors’ friendly against then Nigerian top flight club Julius Berger FC and the club manager Fatai Amoo took an interest in the youngster.

“I had finished my secondary education with good results and was contemplating my next move just to get my father off my back. I had also planned to be a lawyer and fight for the rights of the people in Ajegunle.

“That’s when God paved the football route for me.”

He made his professional debut for Julius Berger before Norwegian side Lyn Oslo snapped him up after a planned move to Portugal’ s Sporting Lisbon fell through.

“In Norway, I experienced my first winter. It was extremely cold and thoughts of running back to Nigeria did cross my mind.

“But knowing it was a once in a lifetime opportunity, I started to grow out of it.

“I told myself that if my tough past and those bullets from the police did not kill me, loneliness, bitter cold or a foreign language will not prevent me from living my dream.”

After a successful first season in Norway (10 goals in 23 appearances), Ighalo joined Italian side Udinese in 2008.

Unable to break into a star-studded squad in his first season, he joined Spanish third-tier side Granada on loan and helped them achieve back-to-back promotions to La Liga by scoring in two play-off finals.

His 31 goals for Granada attracted interest from English side Watford and he joined the Hornets on loan last July, signing a permanent contract three months later.

Ighalo has come a long way from his humble beginnings and has represented Nigeria at U20, U23 and senior levels. An intelligent and religious man, he still feels for the people he left behind in the slum.

“Success, money and fame makes it easy to forget where you come from but God took me out of Ajegunle for a reason.

“I want to use my influence to get those in government to ensure maximum security in Ajegunle and upgrade the football fields to normal standards.

“I’d love to open a proper academy because the ghetto is blessed with talent and you can’t find them in the dark so you need to provide facilities as the light.”

Ighalo played football on dirty streets and pitches controlled by gangs. Next season, he will step onto the pitches at Anfield, Old Trafford and the Etihad. 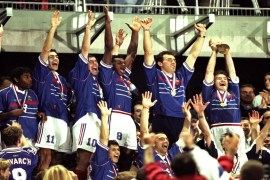 From wars to wages, football writer Sam Pilger tells the story of the modern game.