Jos Buttler and Joe Root thrashed brilliant centuries in England’s highest ODI on the way to a 210-run rout of New Zealand in the first game of the series at Edgbaston.

Adil Rashid hit 69 in new-look England’s total of 408 for nine, which included 14 sixes, and the leg-spinner claimed four wickets as New Zealand were bowled out for 198 to secure England’s highest victory by runs in ODIs.

Buttler walloped a blistering 129, his hundred coming off 66 balls, the second fastest for England and five deliveries more than the 61 he took to make a ton against Sri Lanka last year.

Buttler shared a world record seventh-wicket ODI stand of 177 with Rashid as England, who dropped stalwarts Jimmy Anderson, Stuart Broad and Ian Bell for the series, put memories of their dismal World Cup this year firmly behind them.

New Zealand, who thrashed England in February on the way to finishing as World Cup runners-up, made a stuttering start to their reply when Steven Finn bowled Brendon McCullum (10) and the paceman also accounted for Martin Guptill (22).

Kane Williamson (45) and Ross Taylor (57), who needed treatment after Morgan hit him on the hand with a shy at the stumps, tried to carry the fight to England.

But needing to keep up with a growing run-rate, New Zealand lost Mitchell Santner and Luke Ronchi to successive deliveries from Rashid and any lingering hopes of an unlikely victory ended in the next over when Finn trapped Taylor lbw.

England’s previous best one-day international total was 391 for four against Bangladesh in Nottingham in 2005.

The next game in the five-match series is at The Oval on Friday. 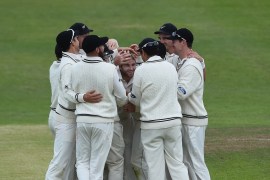 Part-timer Williamson takes three quick wickets as hosts bowled out for 255 in the second-innings.