Roger Federer became the latest big name to get sucked up by a whirlwind called Nick Kyrgios as the Australian tyro sent the Swiss top-seed spinning out of the Madrid Masters in the second round.

Ten months after the then 144th-ranked Kyrgios overwhelmed Rafa Nadal in the Wimbledon fourth round with a fearless brand of tennis, the Australian showed that he is a force to be reckoned with on clay too.

It doesn't really feel real at the moment. It's a strange feeling... it's pretty exciting

Now ranked 35th on the back of contesting his first ever ATP final in Estoril last weekend, Kyrgios brought an abrupt end to Federer’s hopes of winning a fourth Madrid trophy with a heart-pumping 6-7, 7-6, 7-6 victory.

“I think he’s the greatest of all time… I knew before the match that I would have to play one of the greatest matches I have ever played, I wasn’t intimidated at all,” the remarkably composed 20-year-old said courtside following his victory in two hours 37 minutes.

Meanwhile, following a disappointing season in which he has claimed only one low-key title, Nadal went back to using his old racket model to record a 6-4, 6-3 win over American Steve Johnson.

He was joined in the third round by Tomas Berdych and 10th seed Grigor Dimitrov but US Open champion Marin Cilic followed Federer out of the exit door after a 6-7, 7-6, 6-3 defeat by Fernando Verdasco.

Kei Nishikori also progressed with a 6-2 4-6 6-4 victory over Belgian David Goffin, while second seed Andy Murray rounded out the day’s action with a 6-4 3-6 6-0 victory over Philipp Kohlschreiber.

In the women’s draw, Victoria Azarenka suffered a stunning meltdown and blew three match points against world number one Serena Williams before losing 7-6, 3-6, 7-6 in the third round.

Azarenka served for the match at 6-5 and 40-0 in the third set but fell to pieces.

Williams fought back to 30-40 before Azarenka served three consecutive double faults to lose the game and was then defeated in the resulting tiebreak.

Williams, who is gearing up for Roland Garros where she is looking to win her 20th grand slam title, will now play Carla Suarez Navarro, who beat seventh seed Ana Ivanovic 7-5, 1-6, 6-4.

The Russian edged through 6-2 4-6 7-5 after fending off a brilliant comeback from the world number 28.

Fourth seed Petra Kvitova played some of her best tennis of the week to see off Anastasia Pavlyuchenkova 6-1 6-4 in little more than an hour, committing only eight unforced errors. 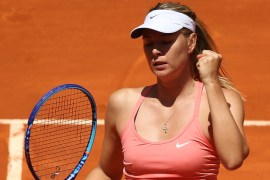 Kvitova struggles to a three-set win while Sharapova crushes Duque-Marino to move into the third round.