The Chicago Blackhawks will play in the Stanley Cup Finals for the third time in six seasons after beating the Anaheim Ducks 5-3 in Game Seven of the Western Conference championship series.

Chicago captain Jonathan Toews scored two early goals and the Blackhawks stunned Anaheim by surging to a 4-0 lead in the second period before the Ducks got on the scoreboard.

With the road victory in southern California, the Blackhawks won the series 4-3 and will meet the Tampa Bay Lightning in the Finals, which start on Wednesday.

It is the third season in a row that Anaheim lost Game Seven of a playoff series at home.

The Blackhawks won the Stanley Cup in 2010 and 2013 and have built up some serious momentum after winning the final two games against Anaheim.

Toews, who has scored five goals in his past four games, was outstading on Saturday but deflected praise, instead paying tribute to coach Joel Quenneville for coming up with a game plan that took Anaheim out of their rhythm.

“The last couple of games, Joel did a great job analyzing the situation and how we can try and take their top players off their game,” Toews told NBC.

“They were having a heck of a series. We just went out and tried to make it difficult on that line. They wanted to play offense and for the most part we were pretty smart defensively against them.” 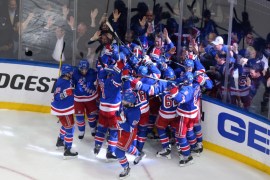 Stepan blasts home a rebound late in overtime to seal Rangers’ comeback win over the Capitals.