In his mind, Lewis Hamilton is 11 again.

It’s the final lap of a Stars of the Future event at a small karting circuit on the edge of the Kent countryside in the UK and he’s trapped. Penned in behind three rivals and struggling to keep pace, he spots one last roll of the dice.

Veering wildly to the right for a hairpin bend, Hamilton takes the others surprise. Suddenly he’s in front and pulling away.

“I remember the moment when I came out of that corner,” Hamilton told Al Jazeera, savouring the moment 19 years later. “I couldn’t believe I went from fourth to first because I didn’t have a fast enough car or engine that weekend.

“I was struggling to keep up with the pack so when I passed them and won the race it was just the greatest feeling.”

Watching on with interest was Ron Dennis, the McLaren supremo.

A year later, Hamilton was asked to sign his first contract. He remained closely nurtured for the next decade, all the way until his Formula One debut aged 22.

But he’s not forgotten the feeling of being an outsider at those early races in his childhood, striving to prove himself among kids with more resources, contacts and all the technical advantages.

“There’s me and my dad with this crappy little kart up against all these guys in these big teams with all the money and the good equipment. We still managed to beat everyone.”

Fast-forward to 2015 and it is a thought inconceivable but Hamilton’s transition to the ranks of the elite was not always guaranteed. His first karting season in 1994 was spent mostly languishing towards the back of the field behind a string of older and more fancied drivers.

That year, the national cadet championship was won by Niki Richardson, a 12-year-old tipped for a future F1 career. Initially Richardson didn’t notice anything special but he remembers the first time things really came together for his younger rival.

“Lewis was two years younger than me so in 1994, he was still learning his trade,” Richardson said.

“He was never near the front that year but he won his first race in December. That day something just clicked and that gave him huge confidence.”

Hamilton’s breakthrough was largely forgotten in the wake of desperate tragedy: His close friend Daniel Spence was killed in the same race when a rival’s kart flipped over and landed on him.

Many subsequently quit the sport but Hamilton was determined to continue.

In 1995, Richardson and a few other leading drivers moved up into the junior category but such was Hamilton’s obscurity, few considered him a favourite even then.

“Lewis won the title in 1995 which was a bit of a shock for everyone,” Richardson recalled.

“He wasn’t even among the top-15 at the start. A guy called Mike Conway was the pre-season favourite but Lewis soon worked Mike out and had the upper hand.

“He started racking up the wins that year and was always the quickest out on track. When a driver knows that he can win, that’s when you see the talent come through. We’ve seen that with the way Lewis has driven over the past twelve months.”

Five years on, the 15-year-old Hamilton was starting out with the Mercedes-Benz McLaren karting team where he encountered Dino Chiesa, a legend of the karting world who had mentored world champions past and present.

“Lewis can take a car to the limit immediately,” Chiesa said.

“That is his talent. While others need to start at 80% and build up to 100%, Lewis can go to the maximum straight away without making a mistake.

“Why is he able to take those risks? Perhaps it’s the hunger and the tough upbringing. But that was always the big advantage he’s had. He won his races in the first five laps because he was immediately in the lead, built that gap and no one could catch him.

“You can still see that now, when he’s in the lead after two laps, he will already have a good gap and the race is finished.”

But it wasn’t just Hamilton’s ability to push a go-kart to extremes which convinced Chiesa he was a future champion.

In karting, there are 34 karts on the grid, all of a similar speed, and that way you can see the real talent in the field

“You could see there was something special inside him. He was very calm, never nervous before races and he managed the race extremely well. He was already extremely professional.

“At 15, it’s easy to be distracted, enjoy the karting lifestyle and treat it like fun. Most of the boys were like that. From the start, Lewis understood this was his career.”

Hamilton’s Formula One career has always been characterised by a combination of intense focus and confidence.

“He really is a smart guy,” Chiesa added.

“At 15, he saw the bigger picture. He realised he needed to dedicate himself to karting because that was his big chance. If you make it good in karting, you can reach F1.”

But there was one weakness: Hamilton was fixated on winning. Finishing second was never an option for him.

“He never cared about championship points. For him, the only objective was to win every time. But in a championship, sometimes you have to be prepared to settle for second and take the points. And he learnt that in 2007, when he lost the championship because of that mentality.”

Chiesa was trackside at the Monaco Grand Prix and when he watches Hamilton drive, he still sees exactly the same driver he first witnessed 15 years ago.

“Believe me, once a driver reaches 15, he will not change for the next 20 years,” Chiesa said laughing.

“They improve a little with experience in terms of making mistakes and learning little things, but the character, the style and the management of the race stays exactly the same.” 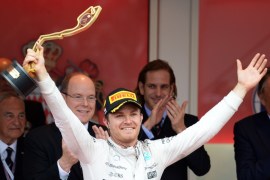