Real Madrid’s hopes of overhauling La Liga leaders Barcelona suffered a stinging blow when they were held to a 2-2 draw at home to Valencia to slip four points behind their arch rivals with two games left.

Treble-chasing Barca had earlier secured a nervous 2-0 victory at home to Real Sociedad and Real’s stumble capped a superb week for the Catalan giants after Wednesday’s 3-0 drubbing of Bayern Munich put them on the brink of a place in the Champions League final.

Real, by contrast, are facing the real possibility of elimination from Europe’s elite club competition following the holders’ 2-1 defeat at Juventus in their semi-final, first leg.

Barca, through to the King’s Cup final against Athletic Bilbao at the end of the month, play their return match at Bayern on Tuesday and Real host Juve on Wednesday.

Valencia raced into a surprise 2-0 lead at the Bernabeu through goals from Paco Alcacer and Javi Fuego before Real forward Cristiano Ronaldo had a penalty saved by goal-keeper Diego Alves on the stroke of halftime.

Pepe pulled a goal back for Real with a header from a corner 11 minutes into the second half and Isco levelled with a superb curling shot six minutes from time but Valencia held on in an action-packed finale.

Saturday’s matches are being played under the cloud of a looming strike orchestrated by the Spanish football federation (RFEF) and the players’ union (AFE) due to a dispute over a new law on collective bargaining for the sale of television rights. 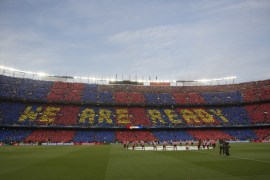 Federation had decided to suspend all domestic matches from May 16 over a spat with the government. 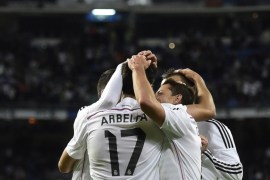