Azhar Ali, One-Day International captain, and Mohammad Hafeez, the former Twenty20 captain, have announced a boycott citing the presence of Mohammad Amir, who is close to making his international return following the 2010 spot-fixing scandal.

Amir, then Test-captain Salman Butt and fast-bowler Mohammad Asif were banned from cricket and given prison sentences for their role in the spot-fixing saga on the tour of England in 2010.

Amir and Asif had agreed to bowl no-balls in return for money during the Lord’s Test against England and the scheme was orchestrated by Butt, who had taken over as captain on that tour.

Amir is on the verge of being named in Pakistan’s tour of New Zealand that starts next month and was called up for the conditioning camp in Lahore. His inclusion, however, forced Ali and Hafeez to stay away.

“I will not attend the camp as long as Amir is there,” Ali had told ESPNCricinfo.

“This is my decision and we are open to discuss with the cricket board. I don’t want to comment on Hafeez’s decision, but we both have the same stance.”

Hafeez, too, had shown reservations before the Bangladesh Premier League last month when, according to the allrounder, he turned down a contract from the Chittagong Vikings who had already signed up Amir.
Hafeez had refused to play “with any player who has tarnished and brought a bad name to the country”.

Pakistan Test captain Misbah-ul-Haq, meanwhile, has confirmed that players have reservations following Amir’s likely return to the national squad despite the fast-bowler having served his sentence.

“People say that Amir has served his punishment and that people have forgiven him for what he did because they have no personal grudges against him,” Misbah told BBC Urdu.

“But his return will come with several question marks, the impact of those nobody can envisage right now.”

Hafeez and Azhar reaction is not unexpected it's PCB who mishandle this issue.

Amir was handed a five-year ban by the ICC which ended on September 1 this year.

The left-arm fast-bowler has featured in Pakistan’s domestic competitions as well as playing nine matches in the BPL where Hafeez was one of his victims.

The warnings, according to a cricket journalist based in Lahore, were always there against the inclusion of Amir but the PCB failed to pay heed.

“The PCB failed to take any of the players in confidence before sanctioning Amir’s reintegration,” ESPNCricinfo’s Pakistan correspondent Umar Farooq told Al Jazeera.

“The apprehension had been showed by some senior players early on but the PCB failed to consider those serious warnings and now the board is standing at a crossroads.

“The situation has now blown up and has created major awkwardness within the Pakistan camp where two of the main batsmen are refusing to turn up.”

The Pakistan Cricket Board (PCB) has refused to publicly comment on the matter but a board official told Al Jazeera that it was trying to resolve the matter “as soon as possible”.

Shahryar Khan, the PCB chairman, has confirmed that he has already held talks with players on this matter and will do so again with both current players and a disciplinary action is possible against the pair if they can’t reach an understanding. 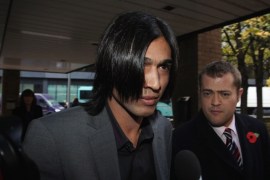 Pakistan fast-bowler has been allowed by the governing body to play domestic cricket before his ban ends in Sept.