Arsenal scored twice in the opening seven minutes and ended the match as a contest with a third in the 19th as they crushed Manchester United 3-0 to move above them into second place in the Premier League at the Emirates.

The Gunners demolished United with some brilliant passing football, taking the lead when Alexis Sanchez scored with a clever near-post flick after six minutes.

They doubled their lead a minute later when Mesut Ozil rifled in from 12 metres and completed the rout when Sanchez blasted in an unstoppable shot for his sixth goal in his last three games after 19 minutes.

United, who were top of the table at the start of the weekend, rarely got going against the home side who were always in control and never looked like slipping up with Petr Cech only seriously troubled once.

The victory was Arsenal’s biggest against United for 17 years and lifted them to 16 points, two behind new leaders Manchester City, and just ahead of United on goal difference.

Earlier, Everton and Liverpool drew 1-1 with both goals coming in the first half of one of the quieter Merseyside derbies of recent years.

Liverpool, who have not lost to their neighbours for five years, went ahead in the 42nd minute when Danny Ings was left unmarked to head in a corner.

But in added time at the end of the first half, Belgium’s Romelu Lukaku drove in the equaliser.

The draw left Everton one point in front of their old rivals but relieved some of the pressure on opposing manager Brendan Rodgers by extending his team’s unbeaten record to six games. 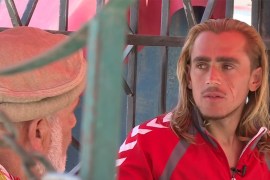 Afghanistan footballers suffer from a short season and a salary that they can barely make ends meet with.