Australia sent England tumbling into the Rugby World Cup abyss when they demolished the hosts 33-13 at Twickenham to ensure the 2003 champions would take no further part in their own tournament after the pool stage.

Flyhalf Bernard Foley did most to break English hearts by racking up 28 points, including two sparkling tries, as Australia booked a place in the quarter-finals and took Wales through with them from Pool A.

Australia were well worth their win, taking a 17-3 lead in the first half and defending resolutely when a desperate England threw everything at them in the second, trying to avoid a first ever pool-stage exit.

“It wasn’t perfect and it’s just another step along the way but the commitment was very good and we’ll be looking for more of that going forward.”

Winger Anthony Watson gave England a sniff of hope with a second-half try and Owen Farrell kicked eight points as they briefly got within seven, but the flyhalf finished the match in the sin bin for a dangerous tackle on centre Matt Giteau.

Giteau had the last laugh when he put a gloss on the score with a last-minute try, which Foley converted to take his tally with the boot to 18 points.

“Absolutely gutted to be going out of the World Cup, words can’t express how disappointed we are,” said England coach Stuart Lancaster, whose long term future will now become a daily topic of speculation.

“Credit to Australia, they are probably one of the best sides we have played in the last 12 to 18 months.”

England now go on to a dead rubber against Uruguay in Manchester next week, while Australia and Wales will face off back at Twickenham to decide who tops Pool A. 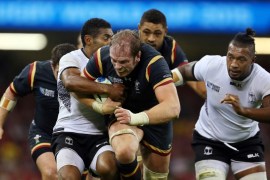 Wales will be through to knockouts if Australia beat England on Saturday; France also on brink of moving into quarters.