Michel Platini believes he is ‘bullet proof’ and has not lost support in his bid to replace Sepp Blatter as the head of world football’s governing body.

The UEFA president, who has been suspended for 90 days along with Blatter, confirmed in an interview in the French daily Le Monde that he had no written contract for the $2m payment he received from FIFA in 2011.

The extra pay for his job advising Blatter from 1998-2002 was “a thing between two men”, Platini said, giving a new version of why FIFA could not pay him in full more than a decade ago.

“I don’t think I’ve lost many votes and those who know me know I can look myself in the mirror,” Platini told Le Monde. “I’m bullet-proof.”

Platini and Blatter are appealing against the suspensions imposed this month by the FIFA ethics committee while it investigates the case.

“What annoys me most is to have been lumped in with the others,” said Platini, who joins a long list of past and current colleagues on the FIFA executive committee who have been implicated in corruption allegations.

Platini told Le Monde that Blatter, newly elected as FIFA’s president in 1998, asked him to name his salary to work as a personal adviser.

“‘How much to you want?’ Blatter asks,” Platini told Le Monde. “I reply: ‘One million.’ ‘Of what?’ ‘Whatever you want, rubles, pounds, dollars.’ There was still no euro then. He replies, ‘Agreed. One million Swiss francs per year.'”

The former France great has previously said FIFA did not pay him in full at the time because of the governing body’s financial problems.

“I worked for several months without pay,” Platini said. “After a while, I go see Blatter: ‘You have a problem paying me?’ He says: ‘Yes, I can’t pay you 1 million because of the wage structure. You must understand that the secretary general gets 300,000 Swiss francs. You can’t get more than three times his salary. So we’ll write you a contract for 300,000 Swiss francs and pay the rest later.’

“And that’s what happened. Only later never arrived.”

FIFA paid Platini in February 2011, weeks ahead of a presidential contest between Blatter and Mohamed bin Hammam of Qatar, who both sought Platini’s endorsement. 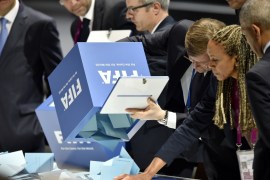 Blatter and Platini will avoid going face-to-face in friendly match after Swiss authorities questioned both.