Errani, the 21st seed, made sure of Italian representation in the semi-finals for the third year in succession, following the trail blazed by compatriot Francesca Schiavone, the 2010 champion and runner-up last year.

The 21st seed’s reward is a match-up against Australian sixth seed Samantha Stosur, defeated by Schiavone in the 2010 final, for a place in Saturday’s title match.

Errani, a slight figure on tour at just 1.64m, had never got beyond the third round of a major before this year’s Australian Open when she reached the quarter-finals.

But the 25-year-old from Bologna illustrated her dangerwoman status by winning three clay court titles in Acapulco, Barcelona and Budapest in the run-up to Paris, putting together a 16-match winning streak in the process.

That confidence was translated into her Roland Garros semi-final run which saw her defeat 2008 champion Ana Ivanovic and 2009 winner Svetlana Kuznetsova.

She was on top of her game straight away on Tuesday with a break in the first game, backed up by another in the ninth as the opening set was comfortably secured.

Errani and 10th seed Kerber, who reached a maiden Grand Slam semi-final at the US Open last year, both struggled for any fluency in the second set as eight successive breaks of serve showed that nerves were beginning to show. Kerber squandered two set points at 6-5, the first saved by an exquisite Errani drop shot, and was left to regret it as the Italian raced away with the tiebreaker, securing victory when the German went wide with a second service return.

Errani will face Australia’s Samantha Stosur who powered her way to the semi-finals on Tuesday with a 6-4, 6-1 win over Dominika Cibulkova of Slovakia.

The US Open champion had too much firepower and experience for the lightweight 23-year-old from Bratislava.

“It’s never easy to come out here, with it windy and playing an opponent who was going for it,” said the 28-year-old from the Gold Coast.

“She runs very fast and has quick legs.

“The last few years have been good for me in Paris. It doesn’t get any better than this.” 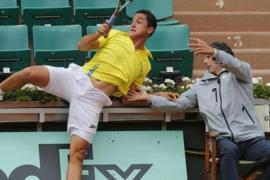 After being saved from injury by his derriere, Nicolas Almagro will face compatriot Rafael Nadal in the quarter-finals. 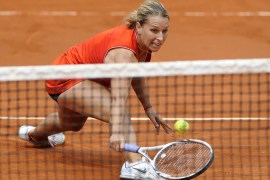 Azarenka tumbles out of French Open

Top seed crashes out in straight-sets to Cibulkova as Djokovic survives a fourth-round scare to reach quarters.