The Boston Bruins won the Stanley Cup for the first time in 39 years when they beat the Vancouver Canucks 4-0 in the deciding game of the NHL championship as violence marred the Canucks’ fans reaction in Canada.

Patrice Bergeron and Brad Marchand each scored two goals for the Bruins while Boston goaltender Tim Thomas won the most valuable player award after notching his second shutout of the finals.

The Bruins, one of hockey’s “Original Six” teams, had not won the Stanley Cup since 1972 and defied incredible odds to win it this time in one of the most enthralling series in years, taking the finals 4-3.

Riot police fired tear gas to control a mob that turned violent in downtown Vancouver on Wednesday night after the Canucks lost the chance to win a first Stanley Cup.

Thousand of people jammed into the heart of downtown in the hopes of celebrating a Vancouver win.

But after the Bruins claimed the Cup the post-game scene brought back memories of a riot that erupted when Vancouver also lost the Stanley Cup in 1994.

Television pictures showed a car burning near Rogers Arena, and local radio stations reported some stores had been looted.

It was not known if any arrests had been made.

Anger among fans marked heartbreak for the Canucks team, who had finished the regular season with the best record and had high hopes of ending their hoodoo.

Three of their four playoff rounds went the full distance of seven games and the Bruins came from 2-0 behind in the finals.

That gave Vancouver the home advantage for the final and although they won their first three games at home, they lost all three they played away in Boston before Wednesday’s decider on home ice.

“We never made things easy on ourselves,” said Boston’s veteran winger Mark Recchi, who had announced at age 43 had announced that he would retire if the Bruins won the cup.

A series-ending hit by Aaron Rome on Nathan Horton incensed the Bruins, who won 8-1 that night.

Since the Horton incident, Boston outscored Vancouver 24 to 4.

Vancouver joined the NHL in 1970-71 season and were appearing in the finals for the first time in 17 years.

It also ruined the celebrations of thousands of fans that had crushed into the city’s downtown area in the hope of repeating the street party that erupted when Canada won the hockey gold medal at last year’s Winter Olympics in Vancouver.

Bergeron scored the only goal of the first period then scored a shorthanded goal at the end of the second period which stretched Boston’s lead to 3-0.

Marchand also scored in the middle frame then finished it off with a second into an empty net while Thomas turned away all 37 shots that were fired at him with the same aggressive acrobatic style that stymied the Canucks throughout the series.

“He made some huge saves and we just couldn’t beat him in their building and tonight we had some Grade A chances but didn’t have much puck luck.” 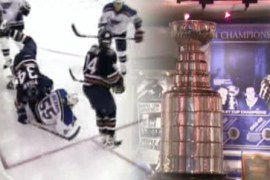 While various sports have their championship trophies and traditions, the prize in the NHL is a special and historic one. 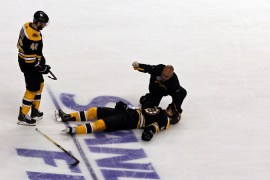 Bruins blast back to crush Canucks

Hit on Nathan Horton sparks Boston offensive as they beat Vancouver 8-1 to pull Stanley Cup finals series back to 2-1. 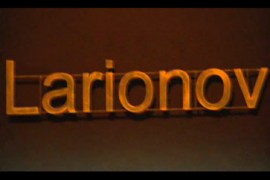 Sportsworld’s Brendan Connor talks to Igor Larionov as he is inducted into the Hockey Hall of Fame.