Australia’s Melbourne Victory got their Asian Champions League campaign back on track with a much-needed 2-1 home victory over Group E leaders Tianjin Teda at the Docklands Stadium on Wednesday.

The Chinese visitors were handed their first defeat of the competition after a penalty by Kevin Muscat gave the Australians the boost they needed.

Muscat slotted in his spot kick on the stroke of halftime, before the home side held on for a 2-1 win, their first of the season.

The Indonesian side remain at the bottom of the group and have yet to win a match.

In the other Group H match, Gamba Osaka of Japan beat Jeju United 3-1 to move into a tie for second, a point behind leaders Tianjin.

Melbourne captain and former English Premier League player Muscat made an early error when he gifted Tianjin a 1-0 lead on 37 minutes when he had his pocket picked by Tianjin striker Chen Tao, who finished with style.

But Carlos Hernandez equalised with a 30-yard free-kick before halftime and Robbie Kruse was fouled in the box a minute later, giving Muscat the chance to make amends.

Melbourne held on for the win, despite the match getting ugly in the second half with both sides repeatedly clashing resulting in nine yellow cards and one red being handed out.

The result puts the team on four points from four games and back in the hunt for the knock-out stages. However, Gamba Osaka’s 3-1 win over Jeju United has kept Melbourne bottom of an increasingly tight Group E, where Tianjin’s lead has been cut to just one point.

In South Korea, a late strike from Lee Dong-gook gave Jeonbuk the win over Cerezo Osaka.

With the game heading for a goalless draw, Lee broke the deadlock 12 minutes from the end to give the hosts a vital three points in a tight group.

In Jinan, Shandong were rampant against Arema, after being held to a disappointing draw by the Indonesians last time around.

Deng Zhuoxiang and Brazilian forward Obina were on target in the first half before the floodgates opened after the break, when Han Peng, Mozhapa Murehemaitijiang and Wang Yongpo all found the mark.

The result lifts the Chinese side into second place in Group G, behind South Korea’s Jeonbuk, who have nine points from four games.

In the later games Al Gharafa ended Foolad Mobarekeh Sepahan’s unbeaten run in Group A with a 1-0 victory, a result that kept alive the Qatari side’s slim chances of advancing.

Al Hilal of Saudi Arabia moved into a tie at the top with Foolad of Iran after beating Al Jazira 3-2, a result which ends the United Arab Emirates club’s championship hopes.

Bunyodkor beat Piroozi Athletic 3-1 in a Group C match, a win that moves the Uzbek side up to second and leaves the Iranians in last with only two group matches to go. Bunyodkor’s chances of advancing were bolstered when group leader Al Ittihad of Saudi Arabia were held to a 0-0 draw by Al Wahda of the UAE.

Thirty-two teams play home and away in eight groups to qualify for the knock-out stages starting in May. 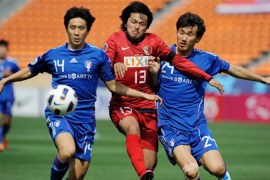 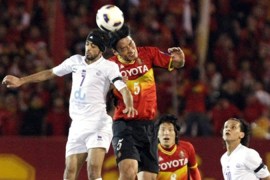 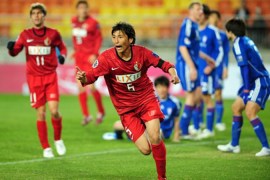 Japan bounce back in Asia 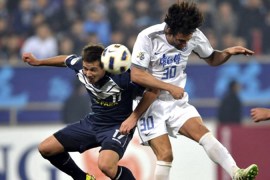 Tianjin Teda maintain top spot in Group E of the Asian Champions League after sharing the spoils with Melbourne Victory.