Red Bull had taken pole in all 15 races this season – 12 for Vettel and three for teammate Mark Webber – but couldn’t keep the streak going at the Yeongam track.

“I’m happy to be here and very proud of what the team has been able to achieve over the course of the last few races,” Hamilton said.

“For Jenson to win the last race and for us to be on the front again and the only ones competing with Red Bull, I’m very happy.”

Red Bull employed a novel strategy of using the same set of super-soft tires for both the first two periods of qualifying meaning they have an extra set of the harder tires for Sunday’s race, giving them more flexibility in race strategy.

“McLaren looked competitive yesterday and though the conditions were completely different today, they were a fair chunk ahead of everyone including us,” Vettel said.

“In the dry this morning they were extremely quick but once again we pushed them very hard in qualifying, perhaps more than they expected and we did a good job in qualification.”

Revving up for race day

McLaren had topped the timesheets in all three practice sessions, at what is the team’s 700th Grand Prix.

Webber was fourth after aborting his final lap of qualifying. Ferrari teammates Felipe Massa and Fernando Alonso were fifth and sixth respectively.

Mercedes’ Nico Rosberg was seventh ahead of Renault’s Vitaly Petrov. The Force India duo of Paul di Resta and Adrian Sutil rounded out the top 10.

As happy as he was with pole, Hamilton was focusing on Sunday’s race. The Briton finished second here last year to Alonso and is hoping to change his luck after a disappointing series of results including two fifth place finishes in the last two races in Singapore and Japan.

“To be back on pole is a great feeling but tomorrow is the most important day,” Hamilton said.

“We’ve had some difficult races in the past but we hope we can redeem ourselves tomorrow.”

Button, who won the Japanese GP last weekend, said a mistake at the last corner prevented a McLaren 1-2 finish.

“I lost way too much time on the last corner,” Button said.

“But I feel good in the car, P3 isn’t what I wanted but I’m looking forward to the race.” 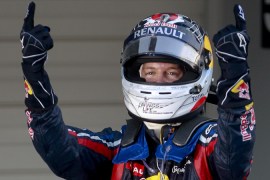 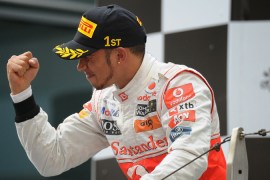 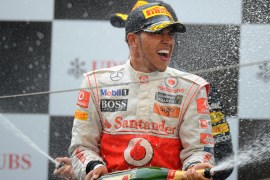 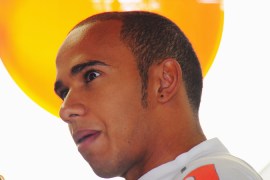