British sprinter Mark Cavendish won his fourth stage of the Tour de France this year by edging out Tyler Farrar of the United States on Sunday.

The victory in the 15th stage was the 19th win on the Tour for the 26-year-old Cavendish.

Alessandro Petacchi of Italy was third.

The mostly flat 192.5-kilometer route through vineyards from Limoux to Montpellier was expected to favour sprinters, giving them a chance to shine again after three days of tough climbs in the Pyrenees.

“I had a lot of trouble in the mountains. It was difficult,” Cavendish said.

“Today, it was a difficult, technical finish – there was wind on both sides and lot of bashing.”

The breezy conditions reminded Cavendish of his native Isle of Man.

“The wind today is the way it always is at home,” he said.

Thomas Voeckler, a 32-year-old Frenchman with the Europcar squad, kept the overall lead that he first took in a crash-marred ninth stage and surprisingly held through the mountains.

“I am happy it was flat,” Voeckler said.

The main contenders played it safe on the wind-swept ride toward the Mediterranean and finished right behind the sprinters.

Five riders – all about two hours behind Voeckler – surged out of the pack at the 2-kilometer mark and built a lead of 4 minutes, 15 seconds.

But the pack, led by Cavendish, barrelled ahead before the intermediate sprint with 46 kilometers left to ride and narrowed the gap on the breakaway.

In that sprint, Cavendish went on to win the most points among contenders for the best sprinter’s green jersey by nosing out Jose Joaquin Rojas of Spain and Belgium’s Philippe Gilbert.

Nicki Terpstra of the Netherlands was among the breakaway riders but was caught with only 3 kilometers left.

Monday is the second and final rest day before cyclists head into the foothills of the Alps for Stage 16 on Tuesday, a 162.5-kilometer ride from Saint-Paul-Trois-Chateaux to Gap.

The Tour ends July 24 in Paris. 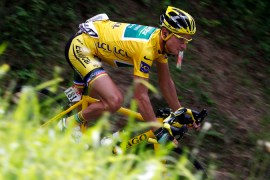 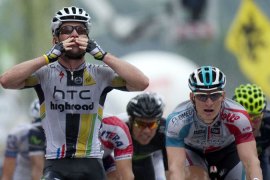 English sprinter pips Andre Greipel to the line 24 hours after being overtaken by the German in previous stage. 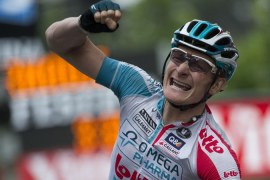 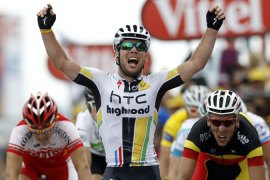