Iraqi football directors have been given one year to settle a row which prevented a new football association president being elected last month and left the country in danger of being suspended by the world governing body.

The reprieve from Fifa means Iraq, who have already been banned twice in just over two years, will be able to defend their Asian Cup title in Qatar in January.

“Fifa has taken note of the situation which surrounded the elections of the new IFA (Iraqi Football Association) board on 24 July 2010,” Fifa said in a statement.

“Under these circumstances, the case was referred to the Fifa Emergency Committee which decided to extend the current mandate of the IFA Executive Committee for one year, meaning until 31 July 2011.

“This deadline should allow both groups to settle their differences and to thus permit the election of a new board.”

A political power struggle has paralysed the IFA, highlighting sectarian divisions in the country seven years after the US-led invasion and three years after a multi-ethnic Iraqi squad triumphed in the Asian Cup.

Two attempts to elect a new president in Irbil last month failed because too few delegates made the journey to the city in Iraqi Kurdistan, where Fifa had decided the vote should take place for security reasons.

The government of Shi’ite Prime Minister Nuri al-Maliki has been trying to remove top officials from sport bodies suspected of having ties to the Sunni-led former government of Saddam Hussein.

IFA President Hussain Saeed, who was once a senior official on the Olympic Committee controlled by Saddam’s son Uday, is facing a challenge from Falah Hassan, backed by the Shi’ite-led government.

Saeed accused the government of putting pressure on delegates not to travel to Arbil and requested that Fifa allow the IFA to postpone the election until further notice.

The most recent ban was lifted in March on condition the IFA agreed to new elections.

Iraq captured the world’s imagination by winning the Asian Cup in 2007 but have struggled since then.

They have employed a succession of coaches and made an early exit from the 2010 World Cup qualifying competition, although they managed a 1-0 win over Australia along the way.

Last year, Fifa allowed Iraq to host their first friendlies since the invasion, and Iraq beat Palestine in two matches played in Irbil and in Baghdad. 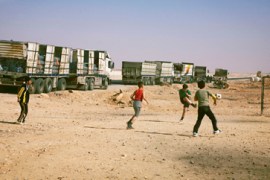 The future of Iraqi football

Who will lead the Iraqi Football Association? 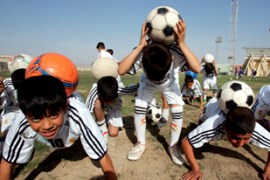 Soldiers searching for four officials accused by the government of corruption.