Inter Milan shocked Barcelona with a 3-1 win at the San Siro in their European Champions League semi-final first leg as Samuel Eto’o played a pivotal role to haunt his former employers.

The defending champions came to Milan having travelled by bus from Spain and may see the wheels come off their title defence if they can’t reverse their fortunes in a week’s time.

Jose Mourinho’s Inter had fallen behind to an early Pedro Rodriguez goal as the 22-year-old fired his 20th goal of the season from Maxwell’s pullback.

But Wesley Sneijder hit an equaliser from Diego Milito’s pass as the Barca defence dallied, before Maicon and Milito capped a fired-up performance from the Italian champions on Tuesday.

Inter will have their work cut out at the Nou Camp next Wednesday and Barca, who looked near-invincible in the months leading up to their 0-0 domestic draw with Espanyol at the weekend, will take solace from their away goal.

Barca’s Dani Alves should have had a penalty after being recklessly brought down by Sneijder with the score at 3-1.

But the Catalans, who paid for a quiet night from superstar Lionel Messi, also faced some fierce defending from Inter, typified by a Lucio block on the line from Gerard Pique that brought out a chest bump between the defender and keeper Julio Cesar.

Mourinho showed his intent by picking an attacking line-up with three forwards plus playmaker Sneijder in midfield.

It was they who created the first clear-cut chance on 18 minutes as Samuel Eto’o curled a left-footer from outside the area that Victor Valdes failed to hold but Diego Milito fired the rebound straight across the face of goal.

Inter were looking relaxed and confident but a minute later they fell behind through some dreadful defending.

Former Inter left-back Maxwell ran far too easily down the left past three non-challenges, reaching the byline where he pulled the ball back and with Inter’s defenders preoccupied by Zlatan Ibrahimovic in the centre, Pedro came in off the right flank to drill the ball home from 15 yards.

The hosts kept going about their task, though, and Sneijder slid a lovely pass into Milito in the inside left channel but again he dragged his shot just past the far post.

On the half hour mark Inter got the equaliser they deserved as Maicon played Eto’o down the right, he pulled the ball back into the middle and Milito fed it on to the unmarked Sneijder at the back post for a right-footed finish.

Good off the ball

In that first half Barca had enjoyed almost 65 per cent of the possession – but Inter were showing the truth of Mourinho’s assertion that you can play well without the ball.

Mourinho had also said before kick-off that Barca were as good as they were back then but that Inter were much improved and their display bore that out.

Inter’s first half had been impressive but they started the second at a canter with Pandev shedding off three players in midfield and then playing Milito behind the backline, the Argentine pulling the ball back for the charging Maicon to prod home his second goal in successive games, just three minutes in.

Messi finally woke up and got his first shot off on 53 minutes but Cesar parried it and the Brazilian stopper had to be alert moments later to block a close-range Sergio Busquets header from a corner.

But Barca could not handle Inter’s attacking flair and on 61 minutes Eto’o crossed from the right and Sneijder’s header bounced up for Milito, arriving at the back post, to nod home.

Cesar stood tall again 11 minutes from time as he punched away a crisp Messi free-kick.

Barca took total possession of the ball in the closing stages and Inter survived one scramble in the box as Lucio blocked Pique’s prod from a tight angle on the line. 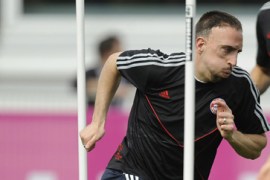 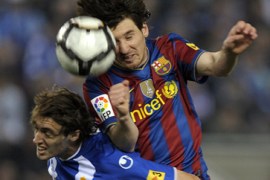 Barca set off for Italy under cloud 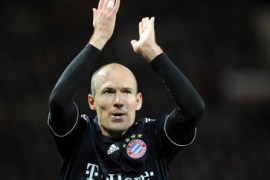 Robben knocks United out of Europe 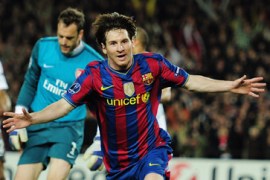