The world indoor athletics championships in Doha finished in style as France’s Teddy Tamgho broke the world record in the triple jump and Cuban Dayron Robles romped home in the men’s 60 metre hurdles – but there was disappointment for once-unbeatable Yelena Isinbayeva in the pole vault.

Tamgho, just 20, provided the shock of the three-day meeting in the Qatari capital with his world record leap of 17.90 metres on his final triple jump.

“I knew I had it in me because last year in Bercy I had a foul close to 18 metres,” the former world junior champion said.

Olympic 110m hurdles champion Robles equalled the third-fastest 60m hurdles of all time with his run of 7.34 seconds for a photo-finish win over Terrence Trammell, who was two-hundredths of a second behind to tie the American record.

Russian Isinbayeva, who won fame with her world record vault at the Beijing Olympics in 2008, left the championships perplexed after unexpectedly crashing out of a second consecutive global championship without a medal.

“I really do not know what happened,” said Isinbayeva, who failed three times at 4.75 metres after opening successfully at 4.60.

“Maybe I was too tired emotionally. I hope in the summer world records will come.”

His time of seven minutes 37.97 seconds made him the oldest man to win a world indoor championships gold medal.

“My kids woke up at 7am in the morning to watch their daddy. So I needed to show them something,” Lagat said.

This is the first time the world indoors have been staged in the Middle East but Qatar is a country with bigger sporting ambitions that this.

They were unsuccessful in their effort to host the 2016 games, but have said they’ll bid again, while they have also tabled a bid for the 2022 football World Cup.

Chairman of the London 2012 organising committee, two-time Olympic champion Sebastian Coe is one man who knows what it takes.

His running spikes have long since been put away, and now the consummate sporting diplomat believes Qatar’s ambition’s may not be misplaced.

“It’s important that the (Olympic) movement is a global movement, that it goes to places that are able to stage the Games,” Coe told Al Jazeera at the Aspire Dome.

“Rio is a good example – going to a city, a country, a continent that has never had the Games.

“Certainly with the ambition, with the infrastructure the ability to stage the Games it’s really important that countries are ambitious – and Qatar is ambitious.”

Usain Bolt may not have come to Doha but another Jamaican Olympic champion was in town, with Veronica Campbell Brown winning gold in the 60m. 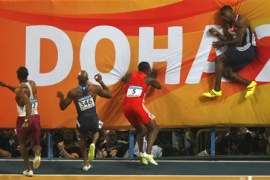 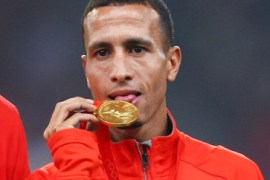 Drug cheats leave us with nothing