Manchester City beat Bolton 2-0 and moved up to fifth place in the English Premier League as they continued their chase for a spot in the top four.

Carlos Tevez put City ahead in the 31st minute with a penalty won by winger Adam Johnson and Emmanuel Adebayor smashed in a powerful 71st-minute shot from a pass by Patrick Vieira.

Victory took City to 44 points, the same as fourth-place Liverpool. The Reds, who moved into the Champions League qualifying places only at the weekend, are at third-place Arsenal in one of Wednesday’s six matches.

Leaders Chelsea are at Everton, while defending champions Manchester United are at Aston Villa.

Johnson, making his home debut after joining from Middlesbrough last week, earned his new team the chance to take the lead by twisting into the right-hand side of the area and drawing a careless challenge from defender Paul Robinson.

Goalkeeper Jussi Jaaskelainen stood to one side of the goal to tempt Tevez into shooting down the middle. Tevez did so and Jaaskelainen managed to get to the shot but it deflected off his knee and into the goal for the striker’s 20th of the season.

Adebayor got his ninth after beating offside, controlling Vieira’s long pass and hitting the ball past Jaaskelainen almost in one movement.

Johnson was substituted late on to a standing ovation and City continued to look the strongest challenger to the established top-four sides.

In Tuesday’s other games, Fulham beat Burnley 3-0 to continue their recovery from a poor run of form, Sunderland drew 1-1 at troubled Portsmouth, and Stoke drew 1-1 at Wigan.

After more than a month without a win, Fulham have two wins and a draw from three games and are in ninth place. Danny Murphy, David Elm and Bobby Zamora scored at Craven Cottage against relegation-threatened Burnley.

Darren Bent got his 16th goal of the season for Sunderland but last-place Portsmouth salvaged just their 16th point of the season when Aruna Dindane headed in at the back post with almost the last touch of the match.

Tuncay Sanli scored 16 minutes from the end to rescue a point for Stoke, who had trailed to Paul Scharner’s early opener. 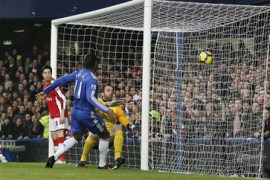 Blues head to the top of the English Premier League with 2-0 win against Arsenal. 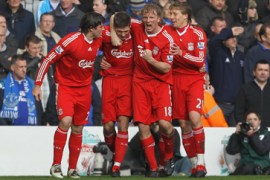 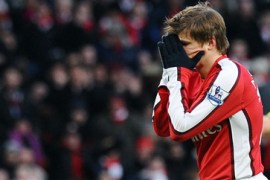 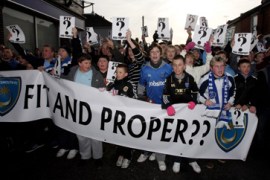