Villarreal and Espanyol clung to the coat-tails of the Spanish Primera Division leaders with home wins that owed much to their attractive style of attacking football.

Nilmar struck the only goal as Villarreal beat Sevilla 1-0 at the Madrigal, maintaining their unbeaten home record this season and putting them third with 30 points from 14 matches.

Espanyol are two points behind in fourth after surviving the 52nd minute sending-off of midfielder Raul Baena to beat Sporting Gijon 1-0.

Luis Garcia struck the winner in the 70th minute to maintain the Barcelona-based club’s 100 per cent record at Cornella-El Prat.

Champions Barcelona are top with 37 points after their 3-0 victory at Osasuna on Saturday, when Real Madrid stayed second with 35 following their 2-0 home victory over Valencia.

Sevilla had two goals ruled out and home keeper Diego Lopez made a fine late save from Fernando Navarro, but it was not enough and Gregorio Manzano’s visitors slumped to their fourth consecutive defeat.

“Seeing the results this weekend, and the defeats for teams such as Valencia and Atletico Madrid, this is a great result,” Villarreal coach Juan Carlos Garrido told reporters.

“It gives us a six-point cushion in the Champions League places, though there is still a long way to go.”

In Barcelona, Espanyol’s Baena was shown a harsh second yellow card after 52 minutes, but Mauricio Pochettino’s side continued to boss the game.

Their winner came when Pablo Osvaldo dinked a ball over the top for strike partner Garcia to score and Sporting slipped into the bottom three.

“We should try and keep our feet on the ground and work with humility,” Pochettino told reporters. “We never changed our philosophy of play despite going down to 10 men.”

Athletic Bilbao defender San Jose had a nightmare Basque derby as his side lost 2-0 at Real Sociedad, conceding a penalty for a handball in the area after 26 minutes.

Xabi Prieto netted from the spot at the second attempt and San Jose buried a shot high into his own net as he looked to cut out a cross. 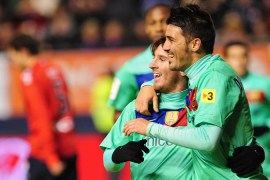