New Zealand outclassed a battling Ireland side 38-18 on Saturday to win the third leg of their Grand Slam tour at the Aviva Stadium in Dublin.

All Blacks flyhalf Dan Carter moved to within three points of surpassing England’s Jonny Wilkinson as the record Test points scorer as he kicked 18 in his team’s convincing win.

Carter was on target until his match-ending eighth goalkick, a conversion which shaved the outside right post. He improved to 1,176 points, just two short of Wilkinson.

In other matches, South Africa’s hopes of ending a miserable year with a rare Grand Slam of the home unions ended in the driving Edinburgh rain as Scotland claimed a memorable 21-17 win at Murrayfield.

Ireland took an early lead with the first try of the match to flanker Stephen Ferris, but the All Black pressure increased. The match was decided by three tries to the New Zealand forwards within eight minutes on either side of the interval.

Anthony Boric barged over on the stroke of half time and Keiran Read and Sam Whitelock put the match beyond Ireland’s reach with tries immediately after the restart.

Ireland lifted the crowd’s spirits in the opening quarter with a spirited counter-attack, featuring captain Brian O’Driscoll, which fizzled out when his centre partner Gordon D’Arcy missed a drop goal attempt.

Daniel Carter kicked his third penalty to put New Zealand ahead 9-6 before Ireland thrilled their supporters after claiming the restart and surging on to the attack.

Jonathan Sexton ran the ball to the left, linking with number eight Jamie Heaslip who slipped the ball to Ferris to plunge over the New Zealand line.

Irish euphoria was short-lived. Mils Muliaina embarked on a bruising run up the centre to put New Zealand deep in Irish territory and a series of exploratory forays were rewarded when Boric ploughed through two Irish tacklers to score.

Ireland were not quite finished and O’Driscoll took his Irish record try tally to 41 in his 106th Test when he scooped up a loose ball and dived over the line. With the match already decided, Read gathered a second try on the final minute.

New Zealand now attempt to complete their third Grand Slam in five years at the Millennium Stadium next Saturday.

With England and Australia claiming expected victories over Samoa and Italy respectively, it was left to the Scots to record the biggest surprise on the third weekend of autumn internationals, after Fiji drew with Wales 16-16 on Friday.

Dan Parks kicked all of Scotland’s points, through six penalties and a drop goal, as a team who were crushed 49-3 by New Zealand last weekend earned their first win over the Springboks since 2002.

The world champions finished bottom of the Tri-Nations table this year after losing five of their six matches and hadn’t convinced during their end-of-year tour of Europe, scraping narrow wins over Ireland and Wales.

But they were still expected to beat Scotland, who had been embarrassed by the All Blacks just seven days ago.

Morgan Parra kicked four penalties as France beat Argentina 15-9 in an error-strewn international match. Fly half Damien Traile added a drop goal in a stuttering performance by the Six Nations Grand Slam champions one week after their victory against Fiji.

Felipe Contepomi kicked all Argentina’s points as the visitors were dominated by France, although the visitors did threaten an upset in the closing stages. 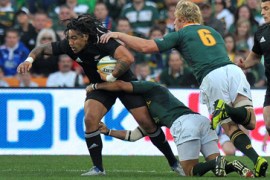