Juventus and AS Roma shared spoils in a 1-1 draw in Turin on Saturday after Francesco Totti’s first-half injury time penalty cancelled out Vincenzo Iaquinta’s opener to keep both teams on the fringes of the Italy’s Serie A title race.

Totti held his nerve for his first league goal of the season and equalised deep into first-half stoppage time with a penalty after Simone Pepe handled the striker’s shot.

Iaquinta, who got the nod over Alessandro Del Piero to start up front for Juve, wasted a good early chance but expertly converted in-form Alberto Aquilani’s assist after 35 minutes.

Juventus enjoyed the better of the chances and only an acrobatic save from Roma goalkeeper Julio Sergio denied the home side the win after Fabio Quagliarella fired in a volley with four minutes remaining.

“We just needed to create a couple more chances in the first half.

“We had enough possession and we caused Juventus enough problems, but we couldn’t find the finish. We needed to be more incisive.”

The point did little to improve either team’s standing in Serie A, although Juve did move up a place for 24 hours at least as they took fourth spot from champions Inter Milan, who face leaders AC Milan in their city derby on Sunday.

In the day’s earlier game, Fiorentina’s Alberto Gilardino eased the pressure on coach Sinisa Mihajlovic as he scored the only goal in a 1-0 win over Cesena, who remain second from bottom.

Gilardino scored in the 59th minute.

From Alessio Cerci’s cross he found space in the area and fired a left-foot shot past Cesena goalkeeper Francesco Antonioli. 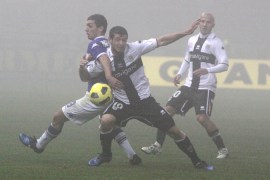 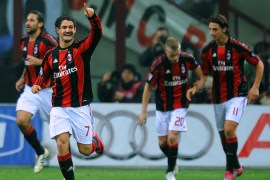 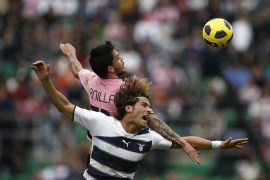