Pohang Steelers manager Sergio Farias plans to take a year-long break after leading the South Korean side to third place at the Club World Cup.

The Brazilian told officials at the K-League club of his intentions during the lucrative Fifa tournament earlier this month, the Korea Times reported.

Farias signed a two-year extension to his contract with the Steelers in June.

“Farias … wants to take time off for a year in Brazil,” Pohang CEO Kim Tae-man was quoted as saying.

“Farias said that he would come back to Pohang after a year if the team wants him.”

Pohang upset Mexico’s Atlante on penalties to finish a creditable third at the Club World Cup last weekend after being beaten 2-1 in the semi-finals by Argentina’s Estudiantes.

Since taking over as Steelers coach in 2005, Farias has captured every domestic trophy at least once as well as this year’s Asian Champions League title.

The Brazilian has been linked with clubs in Japan and the Middle East but signed a two-year contract extension in June.

Farias was again linked with Saudi club Al Ahly while the Steelers were competing at the Club World Cup in Abu Dhabi but he slammed the reports as “ridiculous.”

His plans for a sabbatical, however, have left Pohang officials with a headache.

“Until a few days ago I was discussing plans for next season with Farias,” said Kim.

“I do not have a backup plan at the moment.” 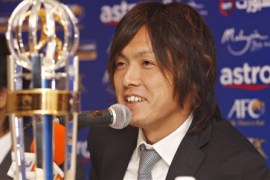