Manny Pacquiao has signed up to slug it out with a local rival in next year’s elections as reports said the seven-time world champion would fight  for an astonishing eighth world title.

As the Filipino hero registered a bid for a congressional seat  representing the southern province of Sarangani, his American  trainer Freddie Roach called for a fight with Israel’s WBA light-middleweight champion Yuri Foreman, according to Western newspapers.

Pacquiao however said he was focused on the election.

“There’s nothing to it at this time,” he said of the reports that Roach wanted him to fight the undefeated Foreman at 154 pounds (70 kilos) in March.

“I have not spoken to him (Roach) about it.”

Foreman claimed the WBA super welterweight championship in one of the Pacquiao-Cotto under-cards, with a 12-round unanimous decision over Puerto Rico’s Daniel Santos.

Press reports quoted Roach as saying that while the boxing world anticipated a blockbuster welterweight showdown with returning American Floyd Mayweather Jnr, it would have to wait until after the May 10 Philippine elections.

Pacquiao’s opponent for the congressional seat is Roy Chiongbian, son of the former provincial governor and brother of the incumbent legislator for the district, Erwin Chiongbian.

The rival’s family built its fortune on domestic shipping.

Pacquiao arrived at the local election office at the head of a convoy of 20 vehicles, cheered on by about 100 supporters as well as his party’s candidates for local posts.

Asked to react to Roy Chiongban’s earlier remarks that Pacquiao had only a 50 per cent chance of winning in the elections, the boxing champ answered: “If that is what he believes, then let him believe that.”

“This is my response to all their remarks. I will not issue black propaganda against my opponent. I want only good things for Sarangani.”

He said that if elected: “I will work for children, for the health of our countrymen and for their livelihood.”

Fifty-seven people including women, journalists and lawyers were massacred in an election-related incident elsewhere in the strife-torn southern Philippines last week.

Pacquiao said that before arriving at the sleepy provincial capital to register, he stopped by the local church “to pray for a peaceful election, without any violence”. 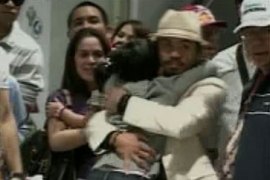