State-controlled media simply did not mention the disruption, which took place Monday in Greece when a protester evaded security and ran up behind Beijing Olympic organising committee President Liu Qi as he was giving a speech.

The image and the report of the protester unfurling a black banner, the Olympic rings replaced by handcuffs, appeared around the world.

But not in China.

The torch relay and the Olympics were supposed to feature a modern China.

Instead, the intense coverage of Beijing preparations has become a stage for protests by pro-Tibet activists, and human rights and religious groups.

The games have also highlighted Beijing’s choking pollution, tensions over Taiwan and issues with a Muslim minority in the west of the country.

Coverage…but not of the protests

The English-language China Daily published at least eight articles about the torch-lighting without mentioning the disruption.

It also ignored the protest of a Tibetan woman who lay in the road of the torch relay until she was removed by police.

“A perfect start on the road to gold,” the newspaper said in a headline.

“The Olympic flame will radiate light and happiness, peace and friendship, and the hope and dreams of the people of China and the whole world,” it said, quoting Liu’s speech.

Liu is also the head of Beijing’s Communist Party.

While ignoring the protests, the paper carried a front-page article accusing some media of “distorted and sometimes dishonest” coverage of recent riots in Tibet.

The Chinese-language People’s Daily, the main voice of the Communist Party, filled half of its front page and all of its sports page with reports of the torch lighting. There was no mention of protests.

“People in Tibet are looking forward to the Olympic Games,” one headline said.

“The whole country’s attention and enthusiasm for the ceremony showed the world that the Chinese people’s passion aroused by the Olympic flame is far beyond sports,” an article said.

Chinese TV also ignored the protests. State-run TV cut away just before the protests on Monday and showed a prerecorded scene, preventing Chinese viewers from seeing the incident while TV commentators didn’t mention it.

The TV coverage was broadcast with a slight delay, allowing censors to intervene.

International TV broadcasts from CNN and the BBC, available only to foreigners in apartment compounds or hotels, were blacked out when they carried scenes of the protest.

Unnerved by the threat of live TV broadcasts, the organising committee is considering a bar on live television broadcasts from Tiananmen Square during the Beijing Olympics.

Such action would upset international TV networks, who have paid hundreds of millions of dollars to broadcast the games.

“We believe that China has the confidence and capability to ensure a smooth Olympic torch relay and a successful Olympic Games,” said Qin, who tacitly acknowledged the protests took place.

A half-dozen Chinese interviewed on the streets Tuesday said they didn’t know about the protests.

“It’s not something we should care about,” said a migrant worker collecting rubbish, who identified himself as Mr. Zhang.

Migrant workers earn about $150 monthly and tens of thousands have been at work in Beijing building the city’s new Olympic venues and airport terminal.

“We’re not even quite sure we can still stay in this city when Olympic come,” Zhang added.

Meanwhile, Australia’s senior Olympic official is urging political demonstrators not to target the Beijing Games amid global moves to bolster security for the torch relay following protests in Ancient Olympia.

The Australian Capital Territory’s chief minister John Stanhope is proposing high security when the flame arrives in Canberra on April 24 on its 130-day journey to the August 8 opening ceremonies in Beijing.

Protests are expected to coincide with the torch’s arrival in the Australian capital on April 24.

Australian police came under heavy criticism for what large parts of the domestic population felt was heavy handed policing during the 2007 APEC conference in Sydney. 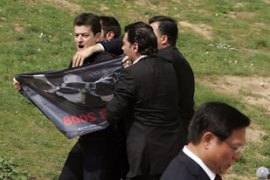 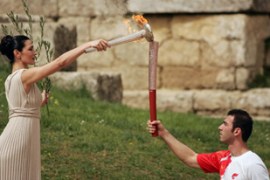 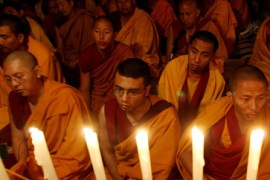 A Thai representative pulls out of the torch relay in protest of China’s action in Tibet.