Anil Kumble, playing in his first Test as captain of India, led his side by example as the hosts restricted Pakistan to 210 for 8 in the opening match of the three-Test series in New Delhi.

Pakistan won the toss and elected to bat, with middle-order batsman Misbah-ul-Haq providing the only real resistance, top scoring with 71 not out for his maiden half-century in eight Tests.

Tailender Mohammad Sami was the other not-out batsman at stumps with 20 while Kumble, the veteran leg spinner, finished with 3 for 38 as Pakistan virtually lost the advantage of having first use of a good batting track at the Ferozeshah Kotla ground.

“The pitch showed variable bounce but some of the batsmen played shots they would surely reconsider,” Geoff Lawson, Pakistan coach, told reporters.

“Misbah was at his fighting best and he and Sami played according to instructions.”

Kumble was superbly supported by left-arm seamer Zaheer Khan, who stunned Pakistan with two early wickets to finish with 2 for 36.

As the wickets fell around him Misbah knuckled down, hitting one six and five fours in his thus-far unbeaten 204-ball knock, with the only error being a mistimed pull shot that Harbhajan Singh failed to hold at mid-wicket when the batsman was on 69.

Zaheer did the early damage with two quick wickets in his opening spell, removing opener Salman Butt and vice-captain Younis Khan to have the tourists reeling at 35 for 2.

The paceman struck in his third over when he bowled left-handed Butt for one with a delivery that cut in sharply, and then had Younis caught out hooking by Patel at fine-leg for seven.

Yasir Hameed, the other opener, and experienced Mohammad Yousuf  looked settled before they were dismissed.

Kumble did not have to wait long for his first wicket as he deceived Hameed on 29 with a straighter one in his fourth over before also dismissing Kamran Akmal (30) and Shoaib Akhtar (two).

Ganguly got a big wicket when he trapped prolific run-getter Yousuf leg-before for 27 in his first over after the lunchbreak and then Patel removed skipper Shoaib Malik for a duck.

Patel, who returned to the side after missing the Test series in England and Bangladesh, had the Pakistani captain caught behind in his second spell.

The Pakistani batting continued to wobble as Kumble bowled Akmal and Harbhajan trapped debutant Sohail Tanvir (four) leg-before in his first Test in more than a year.

India went into the first match of a three-Test series with two spinners, Harbhajan and Kumble, and as many seamers, while Pakistan named three fast bowlers and one spinner in their playing eleven.

The hosts hardly felt the absence of a fifth specialist bowler as Ganguly kept the batsmen under control in his 12 overs.

Pakistan suffered a setback when fast bowler Umar Gul was ruled out of the match due to a back injury. He was replaced by Sohail Tanvir. 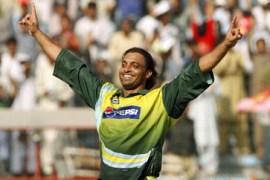 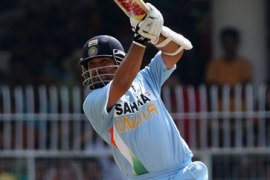 Sachin Tendulkar takes India to a series sealing victory, but misses his century. 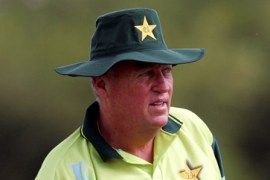