Ethiopians fleeing intense fighting in the northern Tigray region have described their ordeal.

“They are abusing us, we came with five to six children on our backs,” said Qimant, a refugee. “They don’t have anything to drink and eat. All of us are suffering, we don’t have clothes of our own, what clothes we have worn were borrowed from neighbours. We want the Tigray [region] and the government to look after us.”

Fighting between the federal government and the Tigray People’s Liberation Front (TPLF) broke out on November 4 and has sparked international alarm.

Hundreds have been killed so far and thousands displaced, according to the United Nations.

“My mother, I left her in the church. She is an elderly woman,” Barhat, another refugee said. “My brother is blind, we left him there as well. There is no food or water. Everyone ran away and, on the way, we found people murdered with weapons and axes and knives. That’s why we ran. What were we to do? We want to save ourselves.”

At least 11,000 refugees crossed into Sudan, where local authorities have started to prepare a refugee camp, the UN says.

This video was edited by Al Jazeera Newsfeed’s Katya Bohdan. 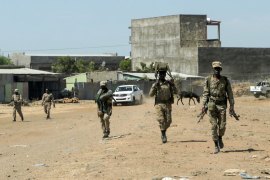 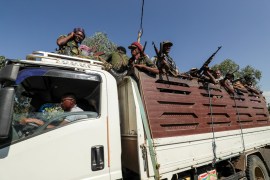 Conflict in Tigray has killed hundreds, sent refugees flooding into Sudan, and raised fears it may draw in Eritrea. 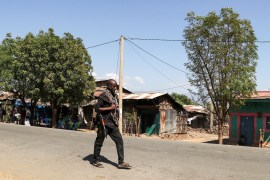