The plight of religious minorities in Iraq has stirred the US into military intervention and air strikes, supporting a weak Iraqi army against advancing Islamic State fighters.

But nearly three and a half years into the conflict in Syria, with at least 170-thousand people killed, the international community has been reluctant to fully engage.

The United Nations has taken its toughest stance yet, blocking funding to the group and blacklisting six of its members.

The UN Security Council passed a resolution in which it said it “deplores and condemns in the strongest terms the terrorist acts of ISIL – the Islamic State – and its violent extremist ideology and its continued gross, systematic and widespread abuses of human rights and violations of international humanitarian law.”

But responding to this, and the US intervention in Iraq, the Syrian Opposition Coalition has called for targeted airstrikes in Syria.  Coalition leader Hadi al Bahra said: “The silence of the international community is unbelievable. There is no excuse for them to keep a blind eye on what is happening in Syria. We have reports supported by documents and videos that crimes against humanity are being committed by Islamic State on a daily basis”.

He went on to say, ‘The UN must stop these double standards. The ongoing war in Syria is not only a Syrian threat, it is a threat to the whole world.”

So, is the fight against Islamic State a single battle? Or are the challenges facing Syria and Iraq too complex to compare?

Bassam Imadi – former Syrian ambassador to Sweden, who defected in 2011 and served on the Syrian National Council.

Phyllis Bennis – director at the Institute for Policy Studies and a Writer, Analyst and Activist on Middle East and UN issues.

Charles Lister – visiting fellow at the Brookings Doha Center, former Head of the Middle East and North Africa region at IHS Jane’s Terrorism and Insurgency Center, and author of the book: “The Jihadist Insurgency in Syria“.

Will US expand strikes?

A revolution up in flames? 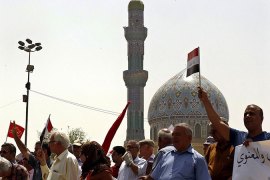 Will US expand strikes?

A revolution up in flames?