George W Bush, the former US president, is promoting a book of paintings, entitled Portraits of Courage: A Commander in Chief’s Tribute to America’s Warriors, depicting American soldiers – veterans from the ongoing “war on terror”.

The George W Bush Presidential Center tells us that the book “brings together sixty-six full-color portraits and a four-panel mural painted by President Bush of members of the United States military who have served our Nation with honour since 9/11 – and whom he has come to know personally”. The hardcover edition costs an affordable $35; the deluxe, signed and personalised edition sets you back $350, with proceeds from sales going to a non-profit organisation that helps veterans.

Bush’s latest efforts received a largely positive review from Mimi Swartz in the New York Times. The title of her article, Art of Redemption, hints – in its use of the word “redemption” – that having sinned and fallen from grace, “W” is trying to regain possession of his soul and his humanity through his paintings.

Bush, who is famously a “Born-Again Christian”, does not need to make these paintings in order to seek absolution from his God. However, he clearly feels the need to do something to gain favour from his earthly critics.

Admittedly, Bush’s portraits depict thoughtful engagements with his subjects – their contemplative expressions sometimes hinting that they have turned inward, sitting before the man who sent them to war. However, these paintings – with each painful stroke attempting to honourably depict individual American “warriors” – are also about recapturing Bush’s legitimacy as the former Commander in Chief of US Armed Forces.

Swartz, in her New York Times article, notes that audiences and art critics were in “shock and awe” at Bush’s growth as a painter – tastelessly referencing the name that US military gave the 2003 bombings of Baghdad using Tomahawk cruise missiles, killing more than 6,700 civilians during the initial phase of the invasion. But even she admits that these wars are “otherwise known as Mr Bush’s disastrous venture in the Middle East”.

The number of US military casualties from Operation Enduring Freedom, Operation Iraqi Freedom and Operation New Dawn, as confirmed by the US Central Command, is now at 6,877, according to Military Times. In March 2013, Veterans Affairs – the body responsible for providing vital services to US veterans – stopped releasing statistics on non-fatal war casualties to the public, claiming unspecified “security” reasons; what is known is that 900,000 service personnel were treated by December 2012 after returning from Iraq and Afghanistan.

And while the budget allocated for Veterans Affairs in 2014 was an astonishing $152.7bn ($182.3bn for 2017), it was estimated that 40 veterans died while waiting for healthcare. The scandal exposed systemic incompetence, mismanagement and corruption.

Given these statistics, it is troubling that the man who sent millions of US troops to a battlefront is now attempting to re-introduce himself as a person who cares deeply for their wellbeing.

Perhaps, Bush wishes to create a space for military veterans in the American public’s minds through his paintings.

Perhaps he wants to create understanding, and to elevate these men and women’s struggles.

Perhaps he paints veterans in order to learn what it might mean to inhabit their damaged bodies and troubled psyches.

But this exercise seems so little, so late.

Bush didn’t pay any attention back in May 2003  when he strutted on the aircraft carrier USS Abraham Lincoln to the roar of cheering military personnel, with a now infamous banner proclaiming “Mission Accomplished” in the background, to the fact that the people he was sending to war were not “liberating” anyone.

He also didn’t pay any attention to the fact that the US military was ill-prepared to deal with the inevitable push-back from insurgents and their homemade IEDs, hell-bent on ridding themselves of an invading army that has destroyed their cities and engaged in well-documented human rights violations, murder-for-entertainment, and sexual violence.

Bush’s decision to go to war caused chaos and destruction in Iraq and Afghanistan, as well as in other countries surrounding the two. A Physicians for Social Responsibility report estimated, in 2015, that at least 1.3 million – possibly more than 2 million – people have been killed in Iraq, Afghanistan and Pakistan from both direct and indirect consequences of the US “war on terror”. Three million Iraqis have been displaced, and 2.5 million Afghan refugees are living precariously in Pakistan alone.

Rather than pulling out our pocketbooks, we should be taking off our shoes, and lobbing them at Bush for his naked attempts to elide his responsibility for the enormity of suffering he created for those in 'other' lands he had no trouble ravaging, as well as for his own countrymen and women.

In Portraits of Courage, there is no mention of these millions of people whose lives have been laid to waste by America’s imperial wars.Their existence – and the worlds they inhabited – are erased from Bush’s image-redemption tour.

In this project, Bush puts himself to the foreground and damningly instrumentalises American soldiers as image-rehabilitation tools. He uses their painful experiences – through code-words such as “courage”, “patriotism” and “sacrifice” – to avoid answering difficult questions about the millions killed in the arenas of war. Their erasure is justified by using potent references to “threats to freedom” and “terrorists”.

An attempt to elide responsibility

Back in 2013, some of Bush’s early paintings went viral after a hacker accessed Bush’s sister’s email account. These paintings appeared to be self-portraits. In one, Bush contemplates his own pale feet, peeking up from above a bathtub; the tap is still running at full speed, filling the tub to the brim. In another, he stands to the right side of a running shower, with his back to the audience, facing the wall. In an odd play in perspective, a blurry reflection of his visage can be seen on a small, round shaving mirror hung to his left. The reflection stares back at us, while the stream of water runs on wastefully.

It may be true that Bush has – since completing his own two tours of duty as President of the United States – spent many hours in bathtubs and showers, contemplating the ways in which resources of his country went down the drain as he attempted to fashion himself as a decisive leader.

It may be true that Bush cares for the men and women who served on the front lines of the so-called global “war on terror”. It may even be true that he regrets sending these military personnel to a battlefront with little cause: no evidence that Iraq held weapons of mass destruction has ever been found.

Yet, he has done little to call attention to the veterans’ services that have failed them, leaving PTSD-affected soldiers untreated, and their healthcare in shambles. He also did little to help people who are still trying to survive the aftermath of America’s imperial wars.

OPINION: Our very own West Texas

The nostalgia that is so desperately being mined at this juncture in American history says more about a desire to return to a folksy, “aww shucks!” cowboy innocence and naivete – a mentality that does not require citizens or leaders of this powerful Empire to think about the consequences of their actions.

Rather than pulling out our pocketbooks, we should be taking off our shoes, and lobbing them at Bush for his naked attempts to elide his responsibility for the enormity of suffering he created for those in “other” lands he had no trouble ravaging, as well as for his own countrymen and women.

M Neelika Jayawardane is Associate Professor of English at the State University of New York-Oswego, and an Honorary Research Associate at the Centre for Indian Studies in Africa (CISA), University of the Witwatersrand (South Africa). She is a founding member of the online magazine, Africa is a Country, where she was senior editor and contributor from 2010 to 2016. Among numerous published texts, Jayawardane recently contributed the main essay for the South Africa pavilion’s 57th Venice Biennale catalogue, and essays for The Walther Collection’s publication (2017) and other artists’ catalogues. Her writing is featured in Transitions, Aperture, Contemporary&, Art South Africa, Contemporary Practices: Visual Art from the Middle East, Even, and Research in African Literatures. 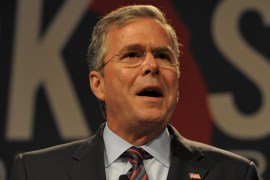 As he officially declares his presidential candidacy, Jeb Bush confronts his family name and its legacy. 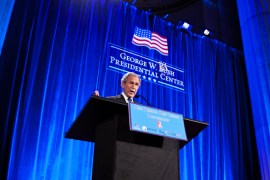 Anonymity is a necessary tool for India’s #MeToo movement

Western media and depictions of death and injury to ‘others’