The world was watching and, no doubt, cringing.

It would be easy to mock the four-day-long cavalcade of near lunacy that was the recently concluded Republican National Convention since, on parade, was a disparate crew of D-list celebrities, political also-rans, and at least one confirmed plagiarist.

But the stakes for the future of the United States and, indeed, the world, are much too high to take the low road in attempting to decipher the geopolitical implications of the deeply unsettling metamorphosis of the Republican party from the supposed “Grand Old Party” to the party of Donald Trump.

Political conventions – particularly on the eve of a presidential election – are choreographed pantomimes designed to elevate and promote the party’s standard bearer as a reflection of its defining beliefs and principles.

The coronation of a demagogue

By that staid measure, the Republican party has unquestionably become – with only pockets of resistance – the institutional embodiment of a reality TV star who takes pride in his boundless narcissism and xenophobia.

In this context, it’s not surprising that speaker after speaker – including Trump’s children – took turns channelling his noxious rhetoric and, in so doing, demonstrated that many Republicans continue to prefer fear over understanding, hyperbole over fact, cartoonish displays of patriotism over authenticity, apologists over thinkers.

Of course, the denouement of this marathon of acrimony was the coronation of a demagogue who, arguably, doesn’t simply flirt with fascism but embraces it, and, presumably, considers it a tactical advantage to winning the White House come November.

Incredibly, if recent opinion polls are a reliable gauge, Trump may well prevail – a prediction that would have been considered inconceivable not too long ago.

Trump understands and satiates the need of corporate media for conflict and drama and he delivers it in unrelenting doses in person and via social media.

That, historically, a bare plurality of Americans – many of whom know or care little about the world beyond their parochial borders – will likely determine that outcome is also troubling.

In any event, Trump’s insular “America First” message continues to resonate with and, alternatively, repulse Americans who view the shockingly ill-informed neophyte as either the country’s messianic salvation or its impending damnation.

But whatever side of the political ledger they’re on, Americans can exercise their franchise – whether they choose to or not.

We outsiders, on the other hand, can only watch from a distance, powerless to influence the US’ increasingly toxic political landscape beyond expressing – publicly or privately – dismay at the prospect that a churlish, impulsive egoist may be poised to become president.

Trump’s popularity is no fluke. His ascendancy is the inevitable, even natural consequence, in part, of the corporate media’s all-consuming fascination with celebrity at the expense of meaningful discourse about matters that matter such as the fact that 47 million Americans, including millions of children, continue to live in grinding, soul-sapping poverty.

And, despite the mythology commonly associated with the “American dream”, they are likely to endure debilitating poverty for generations to come.

Having fully abdicated its role as a counterweight on power and the powerful, much of the US’ consumer press enthusiastically plays courier to personalities-turned-politicians such as Trump, trumpeting meaningless “exclusives” with the human “brand” inside his opulent Manhattan home, private jet or, ubiquitously, by phone.

Rather than challenge Trump’s lies and overt racism, they gently chide his “eccentricities” or coddle him and his calls to build a wall, deport Mexican-Americans en masse and bar and register Muslims, lest they fall out of favour with the ratings bonanza and risk excommunication.

Trump understands and satiates the need of corporate media for conflict and drama and he delivers it in unrelenting doses in person and via social media. The result: The caravan of mendacity gathers momentum and converts along the way.

A result to affect all

Meanwhile, we outsiders observe with deepening anxiety how a globe, already scarred by perpetual war, rampant inequality, and environmental suicide, could possibly become the playground of a petulant, Twitter-happy man-child. It is a harrowing prescription for disaster.

In contrast, Democrats – despite their many grievous faults – displayed a degree of maturity, diversity and even civility during their convention to nominate the first female candidate for president.

Setting aside this laudable history-making and the customary effusive testimonials, it’s folly to believe that, given her lengthy and instructive history of championing war over peace and defending the interests of the few at the top over the many at the bottom, a Hillary Clinton presidency would offer little more than the depressing status quo at home and abroad.

Whichever way the political pendulum swings in the US on November 8, the rest of the world will be reduced to absorbing the prelude and, ultimately, the result, as attentive, if not alarmed, bystanders.

The real, lasting, and potentially catastrophic impact of that much anticipated election will, however, in due time, be keenly felt – to one degree or another – by us all. 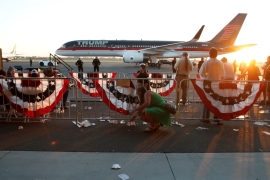 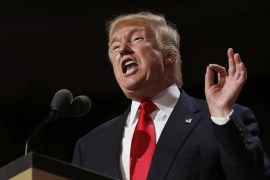 Acceptance speech reflects how Trump has tapped into widespread anger and fear among white working-class men.